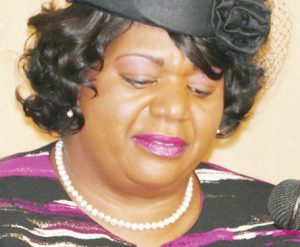 The government has bought 1,600 personal alarms for distribution to persons with albinism (Pwa) to minimise cases of attacks in the country.

Gender, Children, Disability and Social Welfare Minister, Cecilia Chazama, announced the launch of the gadgets during a press conference at Bingu International Conventional Centre in Lilongwe on Friday.

The development comes months after Association of Persons with Albinism in Malawi (Apam) members clashed with police while staging a vigil outside the State House in Lilongwe, seeking President Peter Mutharika’s implementation of the Action Plan on ending the attacks and abductions of Pwa.

“I am, therefore, pleased to inform the nation that today, on behalf of the State President, I am here to launch these security gadgets, which are a personal donation from the President,” Chazama said.

She said some well-wishers from the United Kingdom had also donated 300 gadgets to Pwa, adding that the government had also released K250 million to go towards implementation of National Action Plan on Persons with Albinism in Malawi activities.

Pwa will be moving with the gadgets and press them whenever they are under threat from attackers, thereby alerting nearby police officers to rush to the scene.

The country has an estimated 10,000 Pwa who are killed for their body tissues which are used for superstition issues.

Some 24 people with albinism have been killed and 160 attacks reported to police since 2014.

Apam and Poor and Concerned People with Albinism (PACPWA) have hailed the government for buying the gadgets.

PACPWA leader, Francis Masambuka, said, while the gadgets were not a 100 percent solution to the attacks, they would go a long way in enhancing their safety.

“The gadgets are connected to the network of nearest police station in our locations and once a person with albinism is under threat, they can press it and the police would be able to take notice and rush to the scene. The gadgets would help ease the threat that we are subjected to,” Masambuka.

The launch of the gadgets comes amid continued attacks on such people.

Since December 2018, a man has been killed and two children have gone missing after being abducted.

Amnesty International estimates that only 30 percent of the estimated 148 cases involving perpetrators of attacks on Pwa are about to be concluded in courts of law.