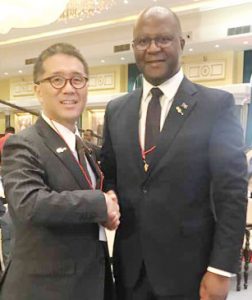 Minister of Health and Population Services, Atupele Muluzi, has reaffirmed the government’s commitment to improving the water and sanitation environment in the country.

Muluzi was speaking in an interview after attending the official opening of the Mahatma Gandhi International Sanitation Convention in New Delhi, India. Over 50 Cabinet ministers from 67 countries are attending the event, which Indian President Shri Ram Nath Kovind inaugurated.

Speaking during his presentation at the conference, Muluzi told the delegates that Malawi is making progress in providing water and descent houses under the malata and cement subsidy programme designed to ensure that people have descent houses.

Muluzi hailed India for its efforts in promoting sanitation. The Asian country is targeting 100 percent open defecation-free status by October 2019 when it shall be celebrating the 150th birthday of its father and founder Mahatma Gandhi

“India had, as of 2014, sanitation coverage of about 39 percent but has made progress in four years to [reach the target of] about 93 percent as of 2018. This is a tremendous achievement and we, as a country, would want to hear and learn more from them as to how they have managed to achieve that. As you are aware, Malawi is also targeting to achieve Open Defecation Free status by December 2019,” Muluzi said.

“I am happy to note that India is making efforts by not only focusing on water and sanitation alone but promoting a paradigm shift in communication and behavioral change among citizens. This is exactly what I have personally been preaching in Malawi and the same has been the message of His Excellency the State President, Professor Arthur Peter Muntharika to Malawians,” he said.

On water, Muluzi told the delegates that, to improve access to safe water, a multibillion kwacha Lake Malawi Water project is on the cards which will see Lilongwe and communities on the stretch from Salima to Lilongwe enjoying access to clean water.

Meanwhile, Malawi’s High Commissioner to India, George Mkondiwa, who was part of the Malawi delegation, has said the country should draw lessons from India’s aggressive approach in achieving the Open Defecation Free status by 2019.

While in India, Muluzi visited United Nations Development Programme to learn how a mobile app is digitising vaccine management in India. There is hope that the initiative can be replicated in Malawi.