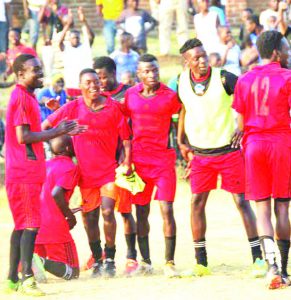 Carlsberg Cup giant killers Hangover United have expressed the desire to pull another surprise this afternoon as they take on TNM Super League giants Be Forward Wanderers at Kamuzu Stadium in Blantyre this afternoon.

Hangover Coach Alfred Chikwanje said they will go into the match as underdogs with nothing to lose as they have achieved their target of qualifying for the last four.

Chikwanje said his team will not be under pressure after beating Moyale and Blue Eagles in the round of 16 and quarterfinals, respectively.

“We won against two big Super League teams on our way to this stage without conceding a goal in regulation time. So Wanderers should not think that it will be a stroll in the park. They should expect a tough match and we are looking forward to crushing them inside 90 minutes,” he said.

Chikwanje added that his team will depend on team work to spring another surprise and win the game.

Wanderers Team Manager Steve Madeira admitted that the match will be tricky as they do not know how Hangover play.

“We have a big game before us and we are aware of what lies ahead. Hangover have been watching us play for many years but we do not know them. For now, we choose not to say much. We will do the talking in the field of play,” Madeira said.

Of the four teams that made it to the semifinals, Hangover are the only ones who went through after winning in regulation time with Wanderers, Nyasa Big Bullets and Masters Security all earning their slots through post-match penalties.

Hangover are also the only lower league team to have gone beyond the round of 16.

The Blantyre-based side could emulate the exploits of Zomba United who went all the way to the finals in 2015.