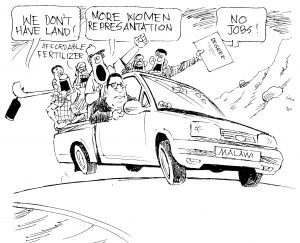 After four months of a steep learning curve, President Lazarus Chakwera is slowly getting into the groove of managing the highly demanding job of governing the modern Malawi.

During the last two weeks, he has engaged in three tasks that are highly significant as Chakwera continues to meander his way as he tries to define his presidency.

On Wednesday last week, he appeared for the second time before Parliament where he answered questions from MPs.

Then on Monday, he announced the appointment of four new Justices of Appeal in the Supreme Court of Malawi, in the process breaking the record by picking twelve new Judges of the High Court of Malawi; with the number evenly split between men and women.

It is difficult to govern the 21st Century Malawi in which citizens, both home and abroad, are acutely aware of their rights and will not hesitate to voice their frustrations, whether legitimate or illegitimate.

But the President seems to be charged and up to it that every frustration any Malawian will have; be sure he is going to address if it is brought to his attention.

Simply put, Chakwera might have his weaknesses and they could be plenty because he is a human being like all of us, after all, but he is establishing it firmly in our hearts that he wants to govern one way only and it is by the rules.

That is why he is making every effort to placate all lobbies with legitimate concerns.

The women lobby cried foul when, due to inexperience, the board appointments Chakwera made were skewed towards men and in some cases directly violating the laid down laws that forced some women bodies and their sympathisers to go on the streets to make their voices heard.

The President’s response was simple and it was: I have heard you but we can even get better than the 60-40 of male to female ratio you are asking in public appointments you are fighting for.

Two weeks later, he does exactly that.

Firstly, he makes history by being the first president in the country to appoint such a higher number of judges to the High Court and he evenly splits them between men and women.

With that stroke of the pen, he has left an indelible legacy on the bench and Judiciary as a whole.

The appointments could not come at a better time than now when the five constitutional court judges that presided over the elections court case have been awarded with the 2020 Chatham House Prize for their landmark ruling that reset democracy in Malawi.

Clearly, new ground is being broken for the country’s Judiciary and as a nation, we can only celebrate.

Then the appearance before Parliament for the second time where he was grilled on Israel; the question of land and how foreigners are monopolising it; the Civil Service and food shortage as well as matters to do with Covid-19. He measured up so well.

The issue of land and foreign ownership will not die down any time soon.

It is a matter that requires the leadership to meander through the mine field of issues such as affirmative action, foreign investment and accusations of racism as well as xenophobia.

Any solution requires courage to balance up these matters.

Chakwera recognises that and promised Malawians that afternoon in Parliament that there will be reforms meant to have new laws on land and he directed the Ministry of Lands to bring the necessary bills during the next sitting of Parliament.

Simply put, there should be a solution that looks at all the issues in land matters while not sounding racist and xenophobic.

The last issue of significance is the bombshell that the President dropped when opening Golden Peacock Hotel in Blantyre last Friday that the Police and Ministry of Home Affairs should relook at the inconvenience that his convoy causes on the roads in Malawi as well as the directive to the Office of President and Cabinet to relook at who must go with him to functions to save money.

This is a cause of celebration as Malawians have complained since time immemorial about how they are inconvenienced when their presidents decide to take a drive on roads.

It is a simply a nightmare to be caught in traffic caused by the delay as result of the presidential motorcade.

Indeed, after failing to understand why our presidents need all those cars forming a one mile convoy, the other issue that has traumatised Malawians all these years is the deadly inconvenience they must endure every time they happen to bump into their President on the roads.

Of course, the President should expect some resistance from some quarters on both matters especially those who make a fast buck from attending presidential or vice presidential meetings.

These are toxic individuals who must simply be ignored. After all, who said it will be easy to change a whole culture of individuals used to milking government coffers on the pretext of accompanying the President on his travels?

In the final analysis, Malawians are in no nonsense mood and they will stop at nothing until they see change on how they are governed.

The ultimate aim is for the country to take a different direction from the past six years.

Change in the Presidency is what we all desire.

The sum total of all this is that it is difficult to govern 21st Malawians.

But Chakwera is up to it and long may it last.