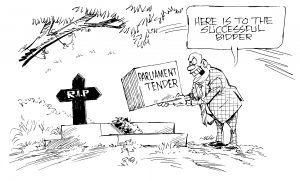 This past week, a lot of ‘not-so-pleasant’ revelations have come out from the doorsteps of the country’s Parliament, which would make one to think again on the proclamations that Parliament houses people that are honourable and as such, their acts are equally honourable in nature.

First thing that shook the Malawi nation was the revelation that someone at Parliament Secretariat, somehow managed to do the impossible by awarding a tender to a person that is no longer a part of this planet of ours we call earth. You can imagine just how crooked and shrewd one would have to be to award a contract to a dead person…but most importantly, why would one do that in the first place, more so within the precincts of the ‘honourable’ house?

Apparently, the matter was taken up by the Speaker who lodged it with the Anti-Corruption Bureau (ACB) and the high priest at ACB, Reyneck Matemba, acknowledged to have received communication on the issue from the Speaker of Parliament and that they have since instituted investigations to nail the mastermind.

In fact, this reminded me of the never ending ‘ghost workers’ flush out exercise synonymous with the civil service…I am waiting for the day when the ‘ghost list’ would be publicised for such would be published in the papers, with the culprits named and shamed. You cannot have a dead person or indeed, somebody who resigned from the civil service long time ago (like myself), still appearing on the payroll and that money being actually withdrawn from banks and claim to be serious as an administration. I hope we will not witness the same under the watch of Tonse Alliance leadership. Oops, forgive me for diverting briefly; the issue at hand is about somebody at Parliament awarding a tender to a dead person. I pray and hope that the investigators will arrest the suspects and bring them before courts for justice.

Not only is this scandalous but also shameful, coming from a place where laws governing the land and public institutions are made.

This should never have taken place in the first place but we all know how corruption was allowed to thrive under the previous Democratic Progressive Party (DPP) regime. If there is one place where people expect to see exemplary behaviour, then definitely it is at Parliament, an oversight institution that is quick to rebuke other public institutions and public servants who misbehave. How is it, then, that somebody could be so sloppy and sleep on the job at this institution that we consider standing on high moral grounds?

In the same vein, It has been claimed that somebody at Parliament buildings also decided to ‘inflate’ prices of flash disks. If, for a second, you thought that the ‘clearing of the rubble’ that President Lazarus Chakwera alluded to when he was being sworn in was going to be a stroll in the park, then you have another thing coming because more earthshaking revelations are likely to continue coming up.

It looks like today we have pitched a tent at Parliament because we are also told that serious bribery allegations have been levelled against an ‘Honourable’ member, DPP Mangochi East member of Parliament (MP) Francesca Masamba. She is said to have solicited a K2 million bribe from one, Michael Chiusiwa, who was shortlisted for an interview and appeared before Public Appointments Committee of Parliament, where Masamba sits. We will not dwell much on this one since it has not yet been proven that the legislator indeed did ask the said candidate for the said kickback (well, for some it is a foregone conclusion since the MP was barred from sitting on the panel). Nonetheless, the allegations alone do not reflect well on the youthful MP and her budding political career. It equally might shatter the hopes and ambitions of other young aspirants who were considering joining the political fray.

Missing the corporate ambience at ‘my bank’

There was recently a merger of some commercial banks following acquisitions and as such, those of us holding accounts with the bank that was purchased were asked to ‘migrate’ to the new landlord. It was not an exercise I eagerly looked forward to but still had to be done, so after months, I found myself along Victoria Avenue (Malawi’s banking street) to fulfill the task. One thing I could not fail to notice was that the corporate ambience that lured some of us in the first place and indeed the excellent customer relations aspect, seem to have disappeared with the previous owner. Clearly, that personal touch is missing and the new owners better do something quick, if at all, they are to win over the ‘migrating’ clientelle.

Remember, customer is king and with that in mind, this ‘king’ is missing the corporate ambience at ‘my bank’.