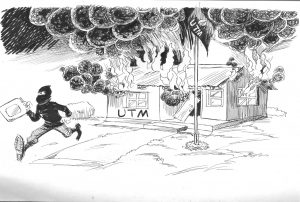 There is evidence everywhere for all to see that some sections of this country do not want the court-sanctioned fresh presidential election to take place. What happens next regarding whether Malawi will hold the poll depends on what the Supreme Court of Appeal has decided.

At the time of penning this piece, the court had not yet delivered its verdict. So, I will not talk much about the verdict and its impact.

It is the violence that has been perpetrated by some criminal elements that believe they have all the power and blessings to unleash terror on anyone however, wherever and whenever they desire that is the heart of this piece.

Bandits in Blantyre terrorised Malawi Election Commission (Mec) voter registration centres a few weeks ago and nothing happened to them. Even the one who was apprehended by community members was adequately protected by the police who kindly whisked him away before releasing him perhaps to damage more property.

Up to now, nothing is happening—we are not seeing or hearing anything and it is not strange that this is the case.

Recently, UTM and Malawi Congress Party (MCP) members have been targets of brutal attacks which have left some of them injured. Well, fingers are pointing at governing Democratic Progressive Party (DPP) simply because the police would have already pounced on the assailants if they were anti-DPP.

We have seen that before. Even before the 2019 Tripartite Elections, opposition political party members were constant victims of brutal attacks even in the presence of police officers who chose to turn their eyes to the other side.

The police have for a long time massaged a certain cabal of people that believes it controls everything in this country including who should live and who should die. So, they go about their daily lives without craning their necks even after committing some of the most nefarious crimes because they are sure no one will pursue them.

That is very dangerous.

Now, those criminals who think they are above the law invaded a UTM office in Lilongwe’s Area 22 and set it on fire. The attack left seven family members severely burnt. By the  time I was writing this piece, two of them had died.

If this is not evil to its extreme, then I don’t know what else can be. These victims of the senseless and wicked attack have nothing to do with politics. They were simply staying in the building that was their home perhaps because they could not afford to pay rentals elsewhere.

The animosity that has been created by the attack will take a long time to wane. Already, there have been protests in Lilongwe over the senseless criminal activity.

In any case, taking a human life—for whatever reason—can never be justified. Life is sacred and must be treated as such even if you are a politician and you think the only way you can remain in your position is by killing someone.

It does not need to reach such levels.

The violence that is happening in Malawi has been condoned for too long. Authorities have not sufficiently condemned it and those with powers to investigate it and get to the bottom of things have chosen to deliberately abdicate their responsibilities.

But it should not persist. It has to stop. We cannot degenerate to levels where violence should be a ‘new normal’. We cannot afford to take that path because the consequences will be dire.

The Lilongwe incident has the possibilities of creating untold chaos. There are others who may not take it anymore and set off on a revenge mission. That is how genocides start and we should never invite one.

While those who attacked the family may be protected by the police and other authorities, locals may have their own means of exacting revenge. That is where silent wars emerge among people and killing becomes silently normal as abnormal as it should be.

The police must be professional for once and do their job. They are supposed to provide internal security and should feel ashamed that they have been thrust into the armpits of one section that feels it can control everything in this country.

Malawi is and should be for everyone. It is absurd that politics has segregated the country into particular sections with some people being more powerful, influential and overbearing. Such deliberate segregations are what inspire fatal internal conflicts which we do not need.

It is strange that we are not learning any lesson from other countries that took the path we are taking now and are now struggling to return to normal ways. They are constantly in conflicts because their leaders championed violence against their opponents until the opponents had been pushed to tight corners where they could not take any more assault.

Imagine what would happen if all the violence that is being perpetrated by some criminals was being responded to in equal measure. What kind of Malawi would we have now?

Of course, there could be others who feel they can benefit from the violence. In fact, political scientists believe that governing parties sometimes perpetuate violence during elections period so that they can scare off their competitors.

Sometimes, the governing parties apparently also create chaos when they feel their chances of retaining authority at the polls are minimal so that the elections do not take place due to insecurity.

All in all, Malawi does not need the violence that is taking place because it may eventually burn this country if we continue to condone it. DPP should join others that are condemning the criminal acts and ‘unleash’ the police to do their work professionally.