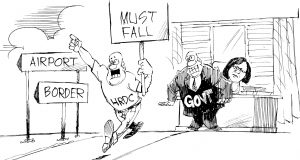 Despite the relentless demos that Human Rights Defenders Coalition (HRDC) has championed to force Malawi Electoral Commission (Mec) Chairperson Jane Ansah to resign, she has not done so until today.

Probably realising that, despite the demos attracting bigger crowds across all cities, Ansah may not bulge even an inch, HRDC announced last week that they would conduct the next demos from this coming Monday to Wednesday and that, this time, the coalition is bent on closure of the two main airports in the country as well as all borders and not just designated routes in cities.

In other key developments during the last 10 days, President Peter Mutharika on Wednesday ordered the Malawi Defence Force (MDF) and Police to stop the demonstrations at airports using the necessary force.

Then we also had seven judges of the Supreme Court of Appeal sitting in Lilongwe dismissing an appeal which lawyers representing Mutharika and Mec filed asking for the dismissal of the ongoing elections case from the Constitutional Court.

In the same Supreme Court, Justice Lovemore Chikopa advised the Attorney General Kalekeni Kaphale to meet with HRDC leaders after he appealed against High Court judge Kenyatta Nyirenda who refused to give him an injunction to stop protesters from demonstrating unless they pay K2 billion as compensation to those that could lose property through looting.

In other matters, the house of HRDC Chairperson Timothy Mtambo was petrol-bombed, burning to ashes a car that was packed outside. No one in the household was injured.

HRDC afterwards accused three ministers of ordering the arson through Democratic Progressive Party (DPP) Cadets but the three ministers have said they have nothing to do with it.

And, of course, judges at the Constitutional Court in Lilongwe continued to hear the case of the challenge against President Mutharika’s legitimacy.

We have had demonstrations in this country since the re-advent of multiparty politics in 1994 but we have not seen the closure of airports. We are in an unchartered territory.

The question we must ask ourselves is: Can we afford to close the two main airports in Blantyre and Lilongwe as well as borders?

It is obvious that HRDC is frustrated that, after weeks of demonstrations against Ansah, the Mec chairperson has stayed put and the DPP establishment, that includes Mutharika, seems to back her to stay put.

It is on account of that that, now, HRDC has told the nation they will do the unthinkable and it is to close this country from the outside world.

HRDC is saying protesters will seal off this country from the outside and no one will go out or come in during the three days of the exercise.

Should this come to pass, what it means is that this country will have difficulties in receiving foreigners and it will be impossible for citizens to travel outside and those outside will not come home.

Revenue through business will be lost and government will lose money as it collects, through Malawi Revenue Authority, millions upon millions of kwacha every day in the borders and at airports in imports duty.

Businesses will lose revenue through disturbed supply chains and there will be shelved investments as it is obvious that the few airlines that take us out of this country and back will simply not fly in on the stated days to protect their equipment in the name of expensive and sensitive aircraft.

Simply stated, what HRDC intends to do from Monday to Wednesday cannot be allowed to pass as it is national suicide and is tantamount to telling the world that we are on the verge of being a failed State because government is clinging to one Ansah.

I know government will not sit on its laurels to allow this to happen.

Mutharika and his government are aware of the far reaching consequences of what HRDC is intending to do and will not allow it to happen.

The President talked tough in Mangochi on Wednesday.

It is not known what else he will order? Is it the legal route? How will the Police and MDF block the demonstrators and using what force? Or will government finally see the sense of mediation and form a ministerial committee to meet HRDC and negotiate a settlement?

At the end of the day, confrontation will be dangerous and can lead to loss of life and property as we have seen in past demonstrations.

This matter must simply be dealt with.

Someone must put a stop to this madness.

As I have argued times without number, the biggest disappointment is that that government has responded to all this tension and anarchy through issuance of press releases and press conferences explaining this and that, instead of dealing with the substantive side of the matter.

Now we have threats from the President.

When others have called for mediation, there is a lukewarm response from government.

There is no meaningful engagement with HRDC even when others such as Pac and former president Bakili Muluzi have volunteered to mediate.

It is as if we had no government that is supposed to be in charge.

On the key demand of the demonstrators, it is now clear that government officials do not want Ansah to go anywhere for political reasons known to themselves.

Does this mean the DPP establishment thinks Ansah can manage to preside over another round of elections in future when both MCP and UTM have said they would not participate in such an election?

Is it just pride on the part of the DPP government that if they remove Ansah, it would mean it agrees with the challenge to its now supposed victory during the 21st May elections?

In Hong Kong, protesters tried to close the airport last week and 200 flights were cancelled but authorities moved fast to put in place modalities to deal with it because it is something that no country can afford.

It is just too dangerous to close airports and borders as we would be shooting ourselves in the foot.

Government should not allow it by dealing with HRDC.

We cannot afford the closure of airports and borders. It is madness we can ill afford.