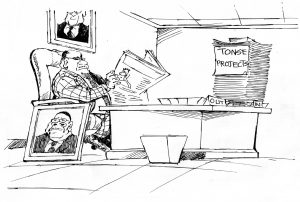 President Lazarus Chakwera on Monday hinted that there are some civil servants that are failing to adapt to change—in line with his government’s efforts to change the mindset—a move he said is letting Malawians down through the provision of undesirable services.

He was speaking at Kamuzu Palace in Lilongwe when he presided over the signing ceremony of Public Service Reform Performance Contracts with 22 ministries, 35 Local Government councils, 10 constitutional bodies, and 66 parastatal organisations.

Now, the President did not exactly use the word sabotage although he implied it.

The reality is that there are two scenarios regarding the matter of public service lethargy and it is this.

The first scenario is that there are indeed people in the public service who owe their allegiance to the old regime of Peter Mutharika because for them to be in the system, it was through his patronage.

These will have no appetite to make the Tonse Alliance government succeed at anything because that would be tantamount to betrayal of the old system that gave them so much and they are still enjoying it until today.

Make no mistake, these worry about their positions but are grinning from ear to ear that the Tonse Alliance is all over the place, failing to deal with them fearing hefty pay-outs for their unfinished contracts.

When all is said and done, the word sabotage applies to this group perfectly. They might say or do the right thing in public but it is just hypocrisy meant to survive and nothing else because their loyalty is still to the old regime.

The second group is that of public officers that have been raised in the system and have tried to be professional throughout the years they have served the various governments.

They have been cultured in a certain bureaucracy that ensures there is no urgency for anything. They barely do the minimum and all they look for are meetings, both home and abroad, where they can make a fast buck for survival as they supplement their public sector salary.

Although in practical terms, the second group of public servants mean no harm, the net effect is the same: Nothing will move although they will not raise a finger to anyone.

But both scenarios need to be dealt with and they are both sabotaging the change in the system that Malawians want to see as a result of their vote on June 23.

As Chakwera noted, Malawians have always wanted change but although on a number of occasions they have voted for it through elections, the public service has remained largely unresponsive to the will of the people as manifested by broken down systems and unwillingness to change course because probably those that must change benefit when things stay the same.

The question that the President must answer is this; If the entire State machinery is filled with individuals who were bent on continuing doing business as usual regardless of what the Malawian people vote to see happen in public offices, what is the solution and why should he keep such people in the system?

If the President recognises there was a clear disconnect between public members whose taxes resource the public sector and the public servants whose talents run it, why does he keep on allowing it to happen without doing away with elements, no matter what the price is?

It seems to me all our interests and larger good is being sacrificed at the altar and happiness of the few, something which is totally unacceptable.

The President hit the nail by saying the blame for these dysfunctions in our public sector belongs to all of us because we have tolerated it for a long time. It has to end and end now.

There is a hackneyed saying to the effect that the proof of the pudding is in the eating and Malawians want to see and touch the reforms that Vice President Saulos Chilima has been championing which has been scanty so far.

On the contrary, what we have seen so far are endless meetings in air conditioned conference rooms in top notch hotels.

Yet the ambitions are lofty and desperately wanted. Who would not want to have the establishment of a fertiliser manufacturing plant in Malawi? Who would oppose that we have an Agricultural Development and Marketing Corporation (Admarc) of old as the state company is expected to implement its Turn-Around Strategy aimed at reclaiming its rightful role, in Agriculture?

These are all doable and should be done.

There are still questions on some proposed reforms such as the engagement of the Malawi Defence Force (MDF) in agriculture but that is neither here or there.

Whether you want to involve the Army or the idea is to bring back the Malawi Young Pioneers (MYP) minus the armed wing to do agriculture, it does not matter.

What Malawians want is eternal food security that the reforms in agriculture can bestow on us.

We have sung this reform song for long, starting with the previous administration, but nothing tangible has happened on the ground to write home about.

On the contrary, things are getting worse and there is malaise everywhere.

If it is sabotage, Malawians voted for the President to deal with it. Nothing should come in-between the improvement of our lives.

Those public officials that the President is complaining about have reached their sale by date. They must go where they belong and not in the system to sabotage us all