The grim scenes and pictures of anti-Jane Ansah protests tell a serious story about a country in trouble.

In all the regions of the country, disenchanted Malawians have taken to the streets to force Malawi Electoral Commission (Mec) Chairperson Ansah to resign. Her iniquity, according to protesters, and of course many others, is that she failed to properly conduct the tripartite elections that were held on May 21 this year.

The series of protests has been characterised by raw anger and disillusionment. And when people are angry and disillusioned, there are so many ways to react. The reaction this time around has been of unrestrained violence which has, sadly, cost some innocent business people millions that will take forever to recoup.

But when one critically analyses why we have reached this point, it is so easy to point out that this country lacks decisive leadership. The demonstrators have been unrelenting and it does not show that they will stop anytime. Their call is so straight forward that only one who is in eternal trance cannot hear it: Ansah must leave her position for overseeing a scandalous election. 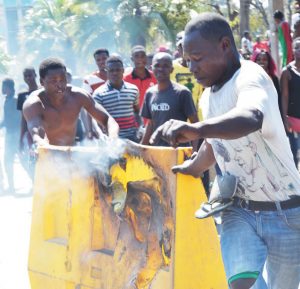 In expressing their anger, Malawians have gone violent and some have taken advantage to loot. To put it in simple terms, Malawi is literally a nation of smoke, fire and chaos. Pure anarchy.

Business and life have been disturbed. Surprisingly and shockingly, Ansah seems unmoved and somehow seems to be a proud spectator who is sipping her coffee in the comfy of her plush edifice while the one who appointed her, that is President Peter Mutharika, is reclining in his chair nonchalantly waiting to see how it will all end.

Mutharika should have, a long time ago, fired Ansah or diplomatically asked her to step aside for the sake of peace and normalcy in the country.

The slowness of reaction by Mutharika and his indecisiveness and his recalcitrance are proving too costly for the nation. What is in Ansah that she cannot be removed as Mec Chairperson even if what is happening in the country spells anarchy? We have justices who can replace her and ably perform at Mec.

Mutharika’s head-in-the-sand attitude in handling issues is proving costly for the nation. Without coating words in lumps of sugar, Mutharika is to blame for all this mess. It is him who appointed Ansah and it is him who has constitutional authority to remove Ansah. But he has chosen to sit back in the comfort of state-funded palaces while Malawians are having property worth millions—and billions, perhaps, in total— being damaged.

Mutharika must rethink and do a cost-benefit analysis. Why is he failing to sacrifice one person for the sake of national peace?

Whatever book Mutharika read on how to be a leader must be badly written and we recommend that the author be taken to task for giving wrong advice.

The truth is that we will not know peace and the nation will make losses, the cost of which is more than we can bear, if Mutharika fails to exercise his authority to relieve Ansah of her duties as people are demanding.

A good leader cannot allow the nation to die on the bloody altar of his or someone’s hubris.