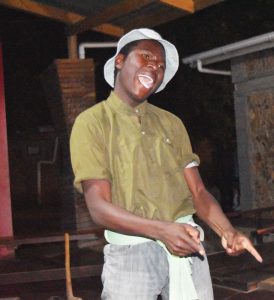 Bakili’s Wit is a play that tells the story of the former head of state Bakili Muluzi.

The theatre group which has in the past staged a number of productions including The Beautiful Hen Behind the Yao Mountain, which they have since turned into a movie, adapted Bakili’s Wit from veteran dramatist Smith Likongwe’s book – Living Playscripts : A Trilogy which has in it Bakili’s Wit, The Tragedy of Bingu and Amai’s Turn.

“It is a challenge for us as a group of young people but we are ready and having been given a go ahead to act the production by Smith Likongwe, we have got his blessings and so we have had massive rehearsals so as not to disappoint him,” Shaban said.

“I am not part of the cast but I am directing the production. Infact we would love to have the former head of state in attendance if he is free otherwise this is a historical production and we are excited to perform it,” Shaban said.

“It is our duty as artists to safeguard and keep the history of our leaders and that is why we adapted this play,” Shaban said.

He said Likongwe paid them a visit when they were rehearsing and that they were motivated.

“His visit during one of our rehearsals was a clear testimony that he trusts us and believes in young people. So, we promise nothing but a good time. All we can say is, let people come and be part of the performance,” Shaban said.

Likongwe said last week that young people have shown potential and courage to perform some of the historical productions and that he was looking forward to the performance.

“These young people need to be supported. They need to be encouraged otherwise the reason for them in staging the play is to continue with showcasing the legacies of our leaders. Recently it was YDC Theatre doing Operation Mandala 1915,” Likongwe said.

He said the play is a personal history of Muluzi starting with his work at Msinja Court in Lilongwe in 1968.