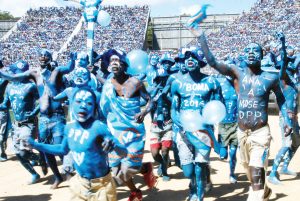 Some people who believe social media is a wastage of time and a circus for the uncircumcised miss out on the wave this generation has created.

I will not rehash William Shakespeare’s candid take that all of us, meaning you and I, have that moment in life when everything seems rosy. Even when we blunder, somehow, there appears some deux ex machina.

Repeatedly, I have, on this forum, said to all and sundry that time is a savage and always has a way to change our fortunes. Who, amongst us, would have thought that Everton Chimulirenji would become Vice President of Malawi? Time, the savage, has the answer.

They say the only thing that is permanent in life is change. In my crude Tumbuka, there is a saying that goes: “Charo nimazgora, chikazgora ba Gamphani pa Nkhamanga” meaning, the world is a transformer and our fortunes might change at the brink of an eye. Sometimes our luck might be sashaying and we might not know where next it will drift to.

Now here is the story. I know of a gang of social media political jingoists who parade themselves in masquerades— which we call zigoba in keeping with the local tongue— and have for themselves an unstamped license to say what they please.

The past week, what has been all over are the appointment of some people to some “enviable” government positions. The pretty side of it is that most of the lads are pretty young and have the world and life ahead of them. But there is a story underneath the story.

What is obvious is that those that have been appointed to the said positions have found their way because they profess alignment to the blue side of the political divide.

This, sadly, is all the reason this country is on a perfect and assured downward spiral. For you to rise, you need to sell your conscience even to the lowest bidder.

Putting it straight, our country is a shame and the future is bleak. We do not have a generation of young men who will stand up for what is good for the country. We defend absolute buffoonery and participate in blatant crookedness as long as we have food on the table by the end of the day.

We can say it louder that these so called public appointments are never in the interest of the country but an official way of rewarding those who have been on the front promoting the ruling party’s agenda.

As it is, none thinks about who is there to move the country forward. All we are bent towards is who will move the interest of our party forward.

All of us know pretty well that if you have to survive, you need to toe a certain party line otherwise you will be thrown in the gutter.

And because we have too many desperate youths who have given up on their lives and have no word such as patriotism in their dictionary, they care less about the future of their country.

But all said, we have seen tables turning in a flash and life and time, the twin savages, have taught and told us that nothing remains forever.

Let them enjoy the moment and make the best of it before the tide turns because it is their time.