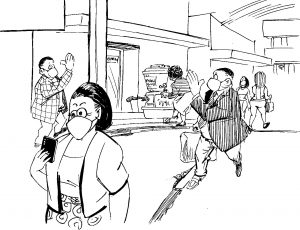 President Peter Mutharika last week declared the threat of Covid-19 a national disaster as a measure to prevent cases of the virus in the country.

He said with technical guidance from the World Health Organisation (WHO), government is implementing activities in preparation of the coronavirus outbreak.

My reaction to the measures was one of relief that the President has finally taken charge of the situation and praying to the Almighty God that the measures he announced are far-reaching enough to avoid infections as well as escalation if we get cases.

The debate on whether the declaration of the disaster was premature in that there was no case declared at point is misguided and uncalled for.

Are we not preached to even on daily basis that prevention is better than cure?

To me, the national conversation we should be having is whether the resources the President announced, that his government has developed a Response Plan and the total budget for this plan is about K15 billion, equivalent to $20 million, are enough.

The debate should be on whether the K2.5 billion the government has provided as immediate funding towards the Response Plan is adequate.

Other measures that the government has put in place, among others, are a plan to deploy health personnel in all border posts and continue screening and surveillance of people in all entry points.

And so the debate about these measures—that also include a directive that all schools, colleges (including technical colleges), both public and private, should be closed by Monday, March 23 2020—should be whether the economy can take them and how they can be mitigated so that the impact is minimal.

This is the robust debate we should be having as a nation.

Let us face facts squarely in the eye. The reality is that the threat of Covid-19 is grave and it cannot compare to social, religious or political implications on citizens as a result of government, for example, restricting public gatherings to less than 100 people.

Make no mistake the impact will be huge and unforgiving in areas such as travel, tourism and hospitality in general.

But there is no choice because anything else would be dire on the country in an event that a Covid-19 case has been confirmed.

Other countries such as South Africa have announced lockdowns and the country is a huge trading partner with Malawi, signalling huge economic ramifications for the country as some raw materials for manufacturing are imported from there apart from other consumer products.

The lingering fear is that Malawi is in Africa with its health infrastructure not as a robust to cope with any huge strain that can come about as a result of the disease.

Contrast this with Italy, a country in Europe with a well-developed medical infrastructure, but which has been in a national lockdown since early March and it is scheduled to last until April 3.

The good news is that over 8,000 people have recovered from the disease.

But when you get such figures and then you remember that this is a European country with far advanced medical infrastructure and you are in Africa, a far cry from it, it sends a debilitating chill of fear down your spine.

This is what should keep our leaders wide awake and plan better on how to prepare and confront this threat.

The measures Mutharika announced are robust but they need to be supported by an infrastructure that can treat those affected and stop those that have not been affected from getting infected.

I gather the key equipment in treating the disease is ventilators. The question the leadership must answer is: Do we have enough stock in our central hospitals and even district facilities?

Have we spared special wards in these hospitals to cater for any outbreak of the disease? Is it not time to quickly use certain national infrastructure that have not been in use and turn them into special Covid-19 hospitals?

I have in mind the State House in Zomba which former president, the late Bingu wa Mutharika, wanted to turn into a cancer hospital.

Would it be a good idea to honour his memory by turning the facility into a makeshift hospital since it is facing ruin due to disuse?

The bottom line is that we are in perpetual fear for our lives, for our families, for our jobs, for our food supply and the rest of things under threat as a result of Civid-19.

These are tough and desperate times and they require desperate measures.

Above all, they require leadership, hands-on leadership.

The President’s address on Covid-19 outlining measures on how to fight the virus should be followed up with his hands getting dirty and be on the ground to ensure that things are happening to protect citizens fearing for their lives.

We have joined a world in despair.

No such thing as free education

A tale of two Americans