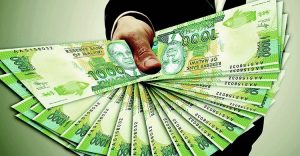 The kwacha has started showing signs of recovery, gaining by three percent against the dollar from K798 to the green buck to K774, Times has established.

The development should be good news to importers who have been having sleepless nights in recent months as the kwacha slid from K733 at the start of the year where it had been for the past 30 months.

Kabambe, who described the recent fall of the kwacha as a blip, said the monetary authorities expected the local unit to stabilise in the short term.

Financial Dealers Association of Malawi (Fimda) President, Patricia Hamisi, Monday attributed the marginal appreciation of the kwacha to the reversal of underlying factors that caused the depreciation.

“We have seen reduced rejection rates from the tobacco floors from a high of 70 percent to now hovering around 25 percent which has in turn improved the flow of dollars from the tobacco market; hence, addressing the challenge of supply.

“We have also seen that there has been Malawi kwacha liquidity in the market. This could be two-fold: The central bank has continuously worked on tightening the monetary policy to mop up liquidity in the market. At the same time, importers prepaid majority of their bills during the pre-election period and now have limited kwacha at their disposal,” Hamisi said.

She said the factors, coupled with Finance Minister Joseph Mwanamvekha’s statement that the authorities were expecting the currency to settle at K750 to the dollar, has, taken out a lot of speculative and panic buying by importers, thereby reducing pressure on the currency.

“In the short term and within the tobacco season, we expect the Malawi kwacha to keep gaining ground against the dollar to reasonable levels as a steep appreciation could also end up working against the economy. After the tobacco season, the expectation is that the central bank will be intervening where necessary to ensure a stable currency.

“In the medium to long-term, diversification and focus on boosting exports should see the economy making positive strides. Already, we have seen in the past week the implementation of such strategies through discussions and commitments made with Afreximbank which is looking at the possibility of injecting a total of $1.4 billion into Malawi to help diversify and increase our exports.

“Their investments seem to be largely focused on tourism and manufacturing, which should help diversify from leaning heavily on agricultural exports. Of huge importance is following through these positive and much-needed strides,” Hamisi said.