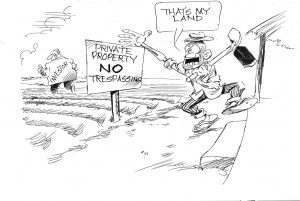 Member of Parliament (MP) for Blantyre City South East Sameer Suleman might have made some outlandish exaggerations when he said land in Limbe is owned only by two individuals because the reality on the ground should be different.

It should be obvious that there are more land owners in Limbe than what Suleman claimed.

The decency in us might also appeal to our souls to stop painting a whole group of people with one brush as we discuss this rather emotive but inevitable land question.

And so it is very easy to dismiss, as I have done, Suleman’s claims on who owns land in Limbe as a total figment of his imagination.

Yet the reality of the matter is that there is simmering but justified discontent on who owns land in Malawi and how the majority of the poor are blocked out from accessing land due to lack of capital.

It all started with Mulanje Bale MP Victor Musova three weeks ago introducing a motion in Parliament that was meant to condemn racism and the inhumane treatment of Malawians in some establishments that are mostly run by Malawians of Asian origin.

It was at that point in Parliament when hell broke loose with matters moving to the issues of land as Suleman made the infamous claim that Limbe is a property of two people of Asian origin.

Land ownership is a recurring problem in the country and Malawians have always complained about it because it is quite apparent even to a one year kid that this means of production is unjustly and unfairly administered in this country.

Yet Malawians have always spoken, some mildly while others have even taken the law into their hands with Vincent Wandale, probably the most famous of them all, after he declared Thyolo and Mulanje as a republic within Malawi and declaring himself its supreme leader.

All this was done in Wandale’s feeble attempts to reclaim what he called was the land stolen from his ancestors by tea estates in the two districts.

But all this ended badly for Wandale at the time, with the authorities mercilessly crushing him to a pulp by forcibly sending him to a mental facility and even taking his job away from him that he was left with no choice but to wait on the courts to bail him, literally, to get restored.

And typically this is how authorities have treated those who seek justice on land and the status has remained the same.

Atupele Muluzi was once Minister of Lands in the former Democratic Progressive Party (DPP) administration and he championed land reforms with a plethora of bills; with some becoming laws while others were put on the backburner after the then opposition Malawi Congress Party (MCP) MPs walked out of Parliament in protest at what they thought were bad land bills.

As I said, what this has all meant is that the status quo about the land question has remained the same.

I am not even sure whether the land laws that Atupele Muluzi championed went far enough to speak to the aspirations of Malawians and how they desired their land be administered.

The constant accusation which every other government has faced is that land in Malawi is being bought by only by foreigners, leaving out the owners of the soil to be landless as tenants.

This is the characterisation of issues as far as land is concerned.

The two MPs and the others that spoke on that Thursday afternoon in Parliament might have made incendiary remarks bordering on racism and xenophobia but in the main they were right to bring out the issue.

The land question must simply be confronted in an honest and fair manner.

It is the duty of Parliament and parliamentarians to be brave and not shriek from responsibility in facing the issues of our time that bother their constituents.

It was inevitable that others would see it as racism and xenophobia in the country with one group painted with one brush that they control all the land and the wealth this country generates.

But in the end, using such accusations to remain quiet on the matter is tolerating a time ticking bomb when reality is clear that if allowed to explode, it would consume us all.

Nobody on the either side of the argument would want this to happen.

In fact, we can, as a country, achieve good race relations if we all feel that the resources this country generates are consumed fairly by all of us. This is how we can achieve genuine peace.

And this is not limited to Malawi.

Land is a hot potato virtually everywhere and has always been an issue in any revolution in the world.

It needs the ultimate solution so we do not have any more Wandales sprouting up everywhere in the country.

The signs of discontent are there and in some extreme circumstance property worth billions of kwacha is getting damaged everyday as a result of land differences.

The new Tonse Alliance government should do better to defuse the tension before it boils over because the signs are clear for all to see.

The government should consider a land audit as a possible solution and investors should be made aware of our land laws so that they fully appreciate them as the old song of fearing to scare investors away should not be the excuse of sweeping the concerns of Malawians on land under the carpet.

The land question in this country is a time ticking bomb.