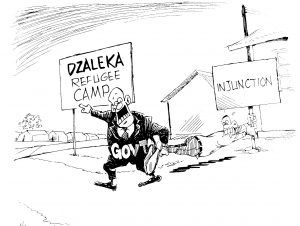 The government’s directive that refugees and asylum seekers who left Dzaleka Refugee Camp should move back to the site has been blocked through a court order, pending a judicial review.

It is a sensitive issue that keeps attracting mixed reactions, with some quarters arguing that the law which governs the status of refugees in the country should be followed to the letter.

Others believe that the refugees, some of whom have been out of the camp for decades and got established in locations, should be integrated into our communities because that is where their homes have lied all the years.

Such arguments attempt to modulate the Encampment Policy, which states that refugees should not illegally leave their designated sites.

Those pushing for the refugees to be allowed to live and operate businesses outside the camp further argue that these people’s rights should be the overriding principle in any decision regarding where they can live.

In the meantime, the issue has attracted the attention of the Malawi Human Rights Commission (MHRC), which is probing the status of Dzaleka Camp to determine whether it can take more refugees in its current state.

Because the issue is also in court, it is difficult to comment on it openly. Nevertheless, it is a public matter whose discourse cannot be fully thwarted.

Of course, the court will ultimately determine the right course of action the government has to take after accepting that a judicial review of the relocation directive should be conducted.

The matter should, in essence, offer important lessons to stakeholders, including refugees themselves, the Ministry of Home Affairs and the United Nations High Commissioner for Refugees on how to prevent similar scenarios.

There are questions regarding how the refugees actually left the camp into locations or how they arrived straight into the locations without getting to the camp first— because there are those who did that.

We all know that people fleeing conflicts in their countries have designated places where they are supposed to stay up to the time they want to return home.

Suffice to say that there have been suggestions that these people should be integrated into regular communities where necessary but, in the meantime, the law directs that refugees should stay and operate businesses from camps.

Regarding the present scenario, someone must have failed to do their job right or blatantly engaged in corrupt practices and allowed the refugees out of the camp.

If laws strictly state that these people should be in camps, how did they manage to leave the site and find themselves space in locations across the country? We, as a nation, should have serious conversations on this when discussing the government’s directive.

Now, one of the arguments some of the refugees are putting across is that they are established in the locations; have businesses; their children are going to school and cannot, therefore, just move out to the camp.

It is up to the court to agree or disagree with them.

MHRC wants Malawi to also look at international human rights instruments which it is party to as it deals with the refugees issue.

Relatedly, it is refreshing to see that Malawians are not taking the law into their own hands on the refugees issue.

There has been some silent tension in locations where non-Malawians compete with citizens in business, with locals arguing that they are being edged out.

In fact, local businesspeople could be among those who have compelled the government to direct that refugees should return to the camp.

On the whole, the issue is in court and we are all waiting for a determination which will offer the ultimate direction. It is a sensitive matter bordering on rights and laws—and both matter as much.