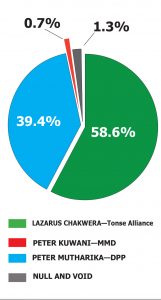 As per the commission’s announcement earlier in the day, there was a build up to the announcement time, the mood lightened up for some while others were seen to be gloomy and out of place.

There were international dignitaries, a lot of Malawi Congress Party (MCP) and UTM members, the parties that formed the Tonse Alliance.

In an unusual manner, the Mec Chairperson was last to enter the hall walking side by side with six fully armed security personnel.

Anyone could tell that Tonse Alliance’s torchbearer Lazarus Chakwera had carried the day as the hall was filled with smilling faces of people from the alliance’s camp.

President-elect Chakwera has been declared winner of the fresh presidential election upon amassing 58.57% of the votes cast.

“Total votes cast 4,445,699; total null and void votes 57,323 representing 1.29 percent of the total votes cast and total valid votes 4,388,376. Lazarus Chakwera 2, 604,043, Peter Kuwani 32,456 and Peter Mutharika 1,751,877. The commission declares that Lazarus Chakwera the candidate who has attained 58.57% of the votes has attained the requisite majority of electorate as appearing in the second schedule and is duly elected as President of the Republic of Malawi,” said Kachale.

Speaking to Times Television in Lilongwe immediately after the announcement the President elect, Chakwera described the win as a win to democracy and justice in the country.

Chakwera said his heart was filled with joy and gratitude to the lord for what he has done for this country.

“I am so happy I could dance all night. My heart is bubbling with joy and gratitude to the Lord, God has been fighting for this country. This is a win for democracy, a win for justice and it will begin to build a new Malawi altogether in which all of us to reset and rebuild.

“I thank God because this is miraculous, we want to thank God because we have witnessed that the truth can prevail. When all is settled and I wake up and realise it is not a dream, I will be able to say more,” he said.

Chakwera assured Malawians that he is a servant leader and that he together with his deputy Saulos Chilima will serve Malawians to the best of their abilities.

“You are my bosses [and] thank you for trusting me to be your servant leader. I together with Dr. Saulos Chilima are ready to work for you. Anyone who did not vote for me should know that I am their servant and I will be there to help them,” he said.

Meanwhile, there was no immediate reaction from the former ruling party the Democratic Progressive Party (DPP) and their alliance partner United Democratic Front (UDF) as no party official from their alliance was available at the main tally centre nor did they pick up our phone calls.

However, earlier in the day, Mutharika during a press briefing at Sanjika Palace grumbled at the matter the election were held.

“Mutharika is living in denial. He must just accept that he is no longer the president. Reality will soon catch up with him,” Trapence said.

Before the announcement of the results, Mec Chief Elections Officer Sam Alfandika alluded to the fact that it was not an easy election to manage as it came amidst the coronavirus (Covid-19) pandemic.

However, he attributed the success to the government, development partners, Civil Society Organisations, Traditional Leaders, political parties and the media.

Chakwera goes into government, faced with a tattered economy as the budget has a deficit of K670 billion.

Born on April 5, 1955 Chakwera a trained Theologian who joined frontline politics in 2013, when he contested at the MCP’s convention which he won with a landslide.

He first contested for the presidency in 2014, in which he lost to Mutharika and described at election as fraudulent.

Malawi has since been ruled by Kamuzu Banda who was the first president, Bakili Muluzi, Bingu wa Mutharika, Joyce Banda and Peter Mutharika.