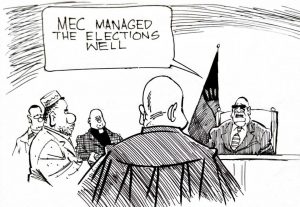 Why should we wait for the children to tell us about our toothless gums or our showing flies?

When Public Affairs Committee (Pac) met President Peter Mutharika to talk about important national issues, I had a gut feeling that Pac was on a sail of vanity.

Peter Mutharika is known for his legendary recalcitrance and congenital delusion that Malawi starts and stops with him. Many times, he has traditionally parried the will of the people with boring nonchalance. One would be forgiven to suggest that the old man does not give a damn about Malawi. He surely has a home somewhere.

It is ironic that a so-called professor of law who, as president, swore to defend the country’s Constitution would ignore and undermine a decision of the court with ageing adamancy.

Only Mutharika and his hangers on who live in their world in which sanity is placed on an expensive premium would argue that Malawi Electoral Commission (Mec) managed the elections well. Mec messed up big time and the elections were embarrassing that is why the presidential results were annulled. The reason Mutharika is insisting on not booting out those presidency through the back door.

But what he must know is that there is a wave of awakening in the country which he cannot stop even if he tries all tricks in the book. If one day Mutharika takes time to look in the mirrors of our national history, he would see that a fall of regime is preceded by arrogance. What happened in 1992? Just like their father, the Democratic Progressive Party (DPP) minions are showing ruthless arrogance and disrespect of the law. Even when you listen to speeches or statements made by some Cabinet ministers, one is tempted to think that either they just want to prove that they are dishonourable or show us how slow they are.

For instance, the other day, Malawians most of whom live far below the poverty line were complaining of exorbitant transport fares that were necessitated by limits in passengers per bus due to Covid-19. The Minister of Information, who happens to be government’s spokesperson, rudely told off the people and told them to walk to their work placs or whichever destination. Well, you can never expect any kind word from a representative of a government that is known for its cruelty, ruthlessness, arrogance and selfishness.

What these people should know is that the more they think they are bigger than Malawi and, as such, indispensable is the more they are creating animosity from the majority poor. Maybe because they live in their illgotten edifices and ride in corruptly-obtained vehicles, they live with an illusion that people out there are happy.

But the truth is that there is simmering disdain from people who are failing to afford a meal a day, the youth who cannot find means of survival because a few connected to power have made jobs and business a preserve for their inner circle.

Evidence of national discontent is all over to see. Even in 1992 when people agitated to throw out oneparty government, the strikes were not in sequel. But this time around, after the bogus May 21 2019 elections, there has been unprecedented series of protests that have attracted masses of both gender, age, social class and religion.

It is only foolhardy to think that power will last forever and that the poor should be treated as the other. Malawians have realised that they have power, and only tired, sleepy, senile and old-fashioned leaders would think they are gods and have the whole country in their hands and are free to do whatever they want. History has prove