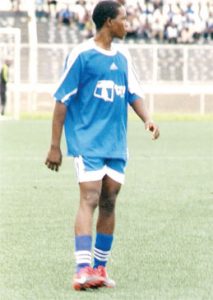 The name Sangala is synonymous with many fields in the country. It is there in football, music, broadcasting and politics.

This is one name that seems to have been abundantly blessed in several spheres of life that one tends to believe that there is a school of talent that grooms descendants of the family in taking up the skills that would turn them into household names.

The game of football has benefitted from the Sangalas on all levels for many years.

To those who have followed Malawi football since independence, the Sangalas are part and parcel of the heritage of our game.

This name was there from as early as 1962 when the country’s first national football team played Ghana at the then Rangeley (now Kamuzu) Stadium in Blantyre.

The team, which lost 12-0, had James Sangala Junior in it. He was the son of the historical James Frederick Sangala who appears on the country’s K100 banknote.

Sangala Junior may not have made it big in the game afterwards but he gave birth to four sons who preserved the legacy of the Sangalas in football.

The first was Jibray, who went on to play for Wanderers Youth in the early 1990s. He was followed by George who made it big at Wanderers’ senior side in the mid-1990s.

George was such a talented defender that he was selected for the under-17 and under-20 national teams. Having passed the test at junior level, George eventually made it into the senior national team to brush shoulders with the likes of Ernest Mtawali, Chancy Gondwe, John Maduka and Patrick Mabedi.

As George’s blossoming career was being blighted by persistent injuries sustained in the Caf Champions League, another Sangala in the name of James appeared on the scene.

James was even more successful at Lali Lubani Road and went on to captain the star-studded side.

He also managed to find his way to the Flames and eventually, foreign clubs in South Africa and Angola could not resist the lure of James’ talent.

But at a time when soccer enthusiasts thought they had seen the back of the Sangalas on the local scene when James left for South Africa, yet another one –Tom- appeared on the horizon.

He followed in the footsteps of his elder brothers by playing for Wanderers as a right back.

Born in 1989, Tom’s football career dates back to early 2000 when he played for Ndirande-based Davies Babies’ under-14 team.

He played for two years and left as he grew older because the team had no under-17 side.

Tom then moved to Wolves United which was also playing in the Blantyre and Districts Football League under Coach Trevor Kajawa.

He finally landed an opportunity to turn out for Wanderers from the habit of escorting his elder brother, James, to the Nomads’ training sessions.

“One day, the then coach Stuart Mbolembole, asked me why I was not coming with my football boots. He encouraged me to join them, and that is how it all started,” Tom said.

At the end of that season, Tom recalls that his brother James and five other players were promoted to the main team.

He took this as an opportunity to fill the vacant positions at the team.

Tom played with commitment and dedication and managed to rise to the position of team captain under team manager Cookson Mwamlowe.

Despite being signed as a defender, Tom says he never loved playing in that position and preferred being in midfield.

He did his job on the pitch quite well and convinced the under-20 national team selectors to pick him.

Despite committing his future to Wanderers, Tom was left frustrated as the club’s officials did not promote him to the senior team.

“I felt bad that I was not being promoted to the senior side and I left the team for Sammy’s United where I played in the Super League for a year under coaches Gerald Phiri and Trevor Kajawa. Unfortunately the team was relegated at the end of that season,” he said.

“It was at Tigers where I learnt a lot of things and my game improved a lot because I met experienced players like Rodrick Wazili, Chisomo Mopiha, Richard Fiwa, Kuruwa Ngwira, Aaron Nyasulu, just to mention a few,” Tom says.

Tom has fond memories of the match Tigers played against Wanderers in the second round of the Super League at Balaka Stadium when his outstanding performance caught the attention of the then Wanderers coach Raman Gumbo who approached him after the game.

“He told me that he wanted me at Wanderers but I told him to wait until the end of the season,” he says.

Joining Wanderers was a dream-come-true for Tom and he just could not let it pass as the season came to an end.

He wore the famous blue-and-white jersey for two seasons and despite struggling to win a place in the first 11, Tom was part of the team that won the inaugural Presidential Initiative on Sports.

Tom also made it into the Flames squad later. He remembers having been part of the squad that went for trials in a friendly game against Zambia but despite impressing, he did not make it into the team that was going to South Africa for a competitive match as he had to sit for an examination at the same time.

“I did not make it to South Africa as I was about to sit for my college examinations. I missed the opportunity to play my first competitive international game but I could not do otherwise because education was my priority,” Tom says.

As fate would have it, Tom’s career was cut short after being involved in a car accident.

“When we were doing pre-season training for what would have been my third season at Wanderers, I was involved in a car accident where I sustained a serious injury on my left leg,” he says.

Tom was forced to hang up his boots and while nursing the injury, another window of opportunity opened up for him when he got employed at Times Group where he works as an Online Media Officer.

Tom is a man of two worlds. His father comes from Ndirande Township in Blantyre City while his mother’s home village is Senzani in Ntcheu District.

He is a father of three who still plays football whenever he has the time.

Tom is a dedicated believer who congregates at Winners’ Chapel in Chitawira Township, Blantyre.