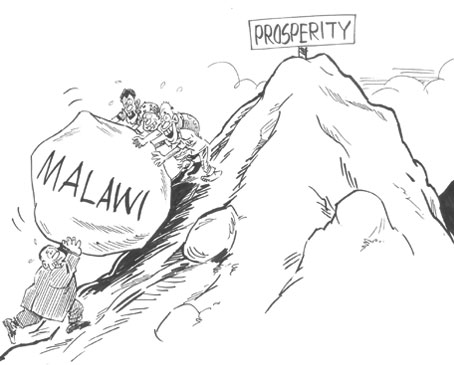 “There are no such things

as curses; only people

Just like our real life leaders whose main preoccupation is self-aggrandisement, corruption and deceit, the Greek have in their mythology King Sisyphus.

King Sisyphus is a mythological King of Corinth who represents everything vile. Sisyphus could lie to the gods without batting an eyelid, he is well-known for his insatiable avarice. He took for a sport killing of people so that he subjugate them just to hold on to his callous reign.

When the gods got enough of Sisyphus’ hubristic character, they cast a spell on him that he should be rolling a huge rock up a steep hill to the top. Every time Sisyphus rolled the rock near the top of the hill, the rock rolled back down and Sisyphus had to start all over again. It proved to be an act in futility and an eternal damnation.

Talking of futility and eternal damnation, then you have surely arrived in Malawi. Last week, as it happens every five years, Malawi had another opportunity to redeem itself from the curse of privation. The choices were not that difficult. Actually, it was the easiest election there has ever been. The top three choices were straight forward: The first one was to leave ajar doors to the public purse and let those who have been dipping their glue fingers continue their loot. The other was to give a chance to a bubbly young man with fresh ideas to liberate the country from the shackles of hopelessness. The other was to entrust a man of the collar to correct mistakes of the past and free Malawi from the manacles of corruption and all heinous deeds. We made a choice and the cost is what we will be bearing soon.

This year’s tripartite elections have violently undressed the nation and exposed all her dirty and unwanted scars. While we have all along posed to the world as a “God-fearing” nation, the truth is that ours is a collection of people whose conscience was long buried under the graves of greed and selfishness.

It is astoundingly shocking how desperately some want to cling to power by brazenly rigging elections. Without a tinge of remorse and with a straight face and raw savagely, election results sheet are being manipulated and all Malawi Electoral Commission can do is to play down everything as if nothing happened.

Well, it could not be that much surprising though. If someone can receive kickbacks and deposit the same to the Big Man account without even looking over their shoulder, then what can stop them from tippexing a ballot paper.

That aside, the elections have clearly shown us that Malawi is divided and there is no national cause. We are moon years from doing away with regionalistic and tribalistic politics. When you ask most why they voted for a particular candidate, the answer is either because he comes from home or because we come from the same region.

It is clear that Malawians do not give a damn about how poor they are as long as someone from home is in power. But this, if we do not know, has been the huge rock of Sisyphus which has been pulling us back down the steep slope of national development.

Of course it is raw naivety to think that all those fighting for State House have benevolence. Actually, one camp is afraid of losing key to the public purse and would do everything it can to continue looting with reckless abandon while the other is tired of playing spectator and, having stayed too long in financial aridity, would not let this just slip again.

All said, Malawians’ decision at the just ended tripartite elections have confirmed my long time belief that as Malawians we care less of our plight and, somehow, we have stunning curious love for rags.

Democracy of ethnicity: Recipe for disaster