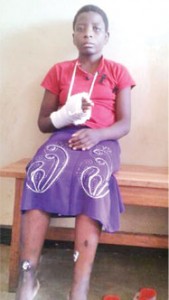 Police in Lumbadzi have rescued a woman, who found herself in a slave-like situation in her search for employment.

The victim, Dorothy Aaron (22), alleges that she was assaulted and molested by Godfrey Mondiwa (49), who had earlier employed her as a saleslady in June 2014 at his shop at Lumbadzi Trading Centre.

She further alleged that Mondiwa’s assaults sometimes came whenever a male customer stayed long at the shop.

“He was tying my hands and filling my mouth with maize flour (ufa) for me not to cry,” Aaron said.

She also alleged that Mondiwa was restricting her from going out of the shop without an escort.

Said Aaron: “He forced me to be using a gututu (a container used as toilet) whenever I wanted to visit the toilet because he could not allow me to go outside. Whenever he went out, he locked me inside.”

However, Mondiwa dismissed the allegations, saying he was only penalising her for misbehaving.

“I was punishing her for misbehaving and stealing money from my sales in the shop,” said Mondiwa.

According to Lumbadzi police spokesperson, Sapulin Chitonde, police learnt about the issue when Aaron was referred to Kamuzu Central Hospital (KCH) after she sustained a fracture on her right hand following an alleged assault by Mondiwa on May 1 2015.

Meanwhile, police have disclosed that Dorothy has multiple wounds and scars all over her body.

“Mondiwa hit Dorothy with a heavy metal bar from which she sustained a fracture on her right hand and has since been treated at Kamuzu Central Hospital. We have also found out that she has multiple wounds and scars all over her body which justifies her claims,” said Chitonde.

Meanwhile, Mondiwa, who is in police custody, awaits trial on three counts of rape, abduction and causing grievous harm contrary to sections 133, 260 and 238 of the Penal Code, respectively.