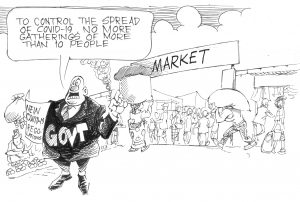 In a bid to save us all, government introduced a plethora of new regulations on how to combat Covid-9 that included banning of gatherings of more than 10 people and making masks mandatory in public places.

To underscore the seriousness of the matter, a motley of several ministers ranging from Health to Information and even the Attorney General gathered one Sunday morning at Bingu International Convention Centre (BICC) to read the Riot Act to us, in the process telling us all that government is stepping up the fight against the pandemic by curtailing a few of our freedoms in a bid to stop the new disease that has already claimed about 200 lives.

But hell broke loose and the churches could have none of it, rising up in arms that they were not consulted as stakeholders, especially on the gathering regulation.

They argued that the regulation effectively meant they were banned and stopped from conducting services to save poor and sinful souls before sending them to heaven.

A meeting was hastily organised between the representatives of the churches and the Presidential Taskforce on Covid-19 where government was forced to capitulate and the regulation has been rescinded back to 100 people as the maximum number so the churches can still congregate.

The churches have their own reasons for their vehement refusal to effectively close shop although science is very clear that this disease spreads fast where people are gathered in larger groups.

In the end, economic reasons underline the refusal for many Malawians to pander to the regulations that the taskforce deem necessary to control the pandemic.

That is why government can say no more gatherings for more than ten people, yet at the same resist from closing the markets or bars.

It is increasingly becoming almost an impossible task for the Ministry of Health as it has to engage in a balancing act of looking at the needs of beating Coronavirus with the difficult task of also pleasing stakeholders such as churches.

When you look at this, you clearly know that probably more drastic measures to beat the disease that can include total lockdown or ban of alcohol cannot happen in Malawi the same way it has happened in South Africa, Europe as well as in America.

In the end, it was good for government to give in to churches. It is a sign of a listening government.

Others can look at it as weakness in a government that cannot stand its ground for the good of the nation.

Either way, government cannot win as Malawians of the 21st Century are a different breed altogether.

Put in the picture the toxic nature of our politics after coming from a bitterly contested presidential election, the end result is inevitable.

This fight against Covid-19 has politics written all over it, which is greatly undermining it.

June and July were the worst months when figures for those affected as well as fatalities sharply rose and the question is; was the country paying for its refusal to go for a lockdown under the Democratic Progressive Party (DPP) administration before June 23?

Whatever the answer to this question is, reality on the ground is that there is a difficult disease which must be tackled decisively but without panic.

Probably that is the reason President Lazarus Chakwera chose to be hopeful in his weekly address last week, hinting that the curve seems to be flattening in recent weeks and more people are being tested.

The talking point from the President’s address was the hint that schools may open next month and that flights may also start at the two international airports in Lilongwe and Blantyre.

As usual, there was no shortage of takers on the ground on the matter, beginning with the Teachers Union of Malawi (TUM) who said teachers will demand their pound of fresh from the Covid-19 by asking for risk allowances if they are going to open the schools as the President intimated.

The need to make a fast buck is inherent in all human beings but I get worried that one day each and every profession will live to justify why they need risk allowances for this and that.

In the end, there will be no money for anything in this country apart from allowances.

Professions, including teaching, should know that there is still compensation for them that comes in form of monthly remuneration called a salary that seems to be forgotten in preference to demanding allowances.

The risk that the teachers will face in a classroom is like the same risk that all of us face when we go to work and meet people we work or interact with.

It is unlike the health workers who test and look after Covid-19 patients on daily basis.

These indeed face an extra risk and are justified to demand risk allowance to compensate them for the extra danger they face.

When everything is said and done, we must appreciate that we are living under difficult circumstances requiring difficult decisions.

Government cannot make a regulation in this day and age to make Malawians suffer in anyway.

It does it for our own good and protection.

Normalcy is what we all need and fast. But it should not be at the expense of further spread and more deaths as we suffer the terror of Covid-19.

Fighting the disease should not be made into an impossible task for government through self-serving refusal of regulations by many a stakeholder.

It is simply not right.

Fifa/Fam Under-16 coaches irked over allowances

Focus turns to next year