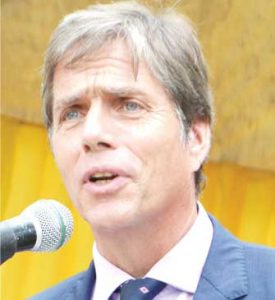 Some, swimming against the tide of reason, descend on fellow human beings and ‘book’ a place in jail.

Others, forced by circumstances, find themselves acting irrationally and, likewise, ‘book’ for themselves a place in jail.

In all cases, after the due processes of the law, the destination is jail— a place many know but few wish to spend a day, let alone a night, in.

But the reality is that jails are a fact of life, in Malawi and elsewhere.

It is also a fact that not all who ‘book’ a place there— courtesy of disregard for, or ignorance of, the law— are wrong. Some, due to faulty arguments in court, either by themselves or those they hire to represent them, find themselves in a place they do not belong.

Whether one has been incarcerated due to circumstances of their own making or the machinations of others, Norwegian Ambassador to Malawi, Kikkan Haugen, feels that those in prisons should be treated with dignity.

He says prison is not a place designated for abuse of human rights— meaning, those [rights] of the inmates—or suffering and loss of life, observing that such treatments are not part of any sentence meted out by a court of law that recognises human rights.

Haugen says the act of imprisonment carries with it specific and material commitment to protect the prisoner’s human dignity, apart from recognising the right of people in prisons to be treated with respect and humanity.

Speaking during the launch of the four-year Prison Management Reforms and Health Management and Delivery Systems in Malawi Prisons Project in Lilongwe, Haugen made it clear that prisoners in Malawi deserve better life.

The Norwegian envoy says prisoners’ rights feature on the list of international human rights concerns for Malawi under the African Union and United Nations— to the effect that Malawi is one of the countries where the rights of prisoners are violated.

“The reason why prisoners’ rights need to be protected is that, added to being human, their level of vulnerability is very high. Prisoners do not have their freedom, they are confined and, frequently, what they do is prescribed. Because of this, their ability to make a voluntary decision free from coercion is limited.

“Deprivation of liberty establishes a regime of absolute control, loss of privacy, limitation of living space and, above all, a radical decline in the individual’s means of defending himself,” Haugen says.

He says the project seeks to promote prisoners’ rights as well as the improvement of prison conditions.

It also seeks to ensure that prisoners’ rights are respected and that they are given a better chance of becoming productive members of society.

Minister of Home Affairs and Internal Security, Cecelia Chazama, admits that conditions in some of the country’s prisons continue to be described by many as dehumanising, largely because most of the prison cells are congested, making it more difficult to manage health issues.

“However, we, as the government, are committed, and are doing everything possible within our means, to ensuring that such challenges are dealt with with speed to conform to the Mandela rules that set the minimum standards for the treatment of offenders,” Chazama says.

She says availability of food, clean water, good sanitation and well ventilated infrastructure is key to promoting improved standards in the country’s prisons.

The United Nations Office on Drugs and Crime (UNODC) is expected to implement the project with funding of about $3.5 million from the Embassy of Norway.

UNODC Southern Africa Regional Representative, Zhuldly Akisheva, says most prisons in Africa were built during the colonial era and are in a deplorable state of disrepair.

Akisheva adds that the majority of them are running without healthcare services and are not suitable for human habitation.

The main objective of the project is to develop an effective and sustainable national response to the chronic drivers of challenges facing prisons— overcrowding, in particular— thereby improving the health and living conditions of Malawi’s prison population.

Councils warned over abuse of funds

Too broke to make martyrs happy

Plight of persons with albinism: Malawi banks on Africa protocol

Borehole gets piped water to 6 villages