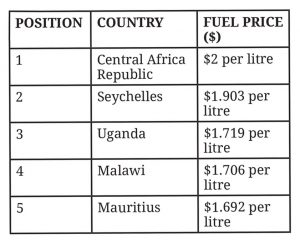 Malawi is ranked fourth on the list of African countries where consumers are paying the highest price for fuel in dollar terms, data we have consolidated show.

At the Southern African Development Community level, Malawi’s fuel prices are seen to be the ‘most expensive’ compared with those in peer countries.

Figures from GlobalPetrolprices.com show that at $1.706 per litre on average, local fuel price is the fourth most expensive in Africa after Uganda, where the price of the commodity is at $1.719 per litre, Seychelles, where fuel is being sold at $1.903 per litre, and the Central Africa Republic where consumers are buying fuel at $2.222 per litre.

According to regional publication, Business Insider Africa, Malawi is among countries that recorded some of the highest gas prices in the African region all year round.

Data from Malawi Energy Regulatory Authority (Mera) which we have seen also show that even at regional level, the highest prices of petrol and diesel were prevailing in the country as at last week.

Consumer rights watch-dog, Consumers Association of Malawi (Cama), attributed the elevated cost of fuel in the country to ‘huge’ levies on the price build up, and costly means of importing the commodity.

Cama Executive Director John Kapito Tuesday said at K970 per liter, the landed cost of fuel remained relatively lower, except for the levies the commodity attracts, hence the higher price.

“As one of the poorest countries within the region, this is putting more pressure on poor consumers.

“Until we choose to remove some of the taxes and consider other effective and cheaper means of importing and ferrying the commodity, the prices will remain high,” Kapito said.

Malawi University of Business and Applied Sciences-based economics lecturer Betchani Tchereni said recent trends in the petroleum industry might have contributed substantially to rising inflation in the country.

“The price of fuel is a big determinant of inflation in Malawi. When the price goes up like that, it also means that inflation will be going up.

“What this means, really, is that we are a country facing a higher cost of living than many other countries within the region and it might be even around the continent,” Tchereni said.

Mera, however, maintained the prices of diesel and paraffin at K1,920 and K1,261 per litre, respectively.

Lately, oil prices on the global market have been seen going down as the US dollar hit its strongest level in more than two decades while fears of rising interest rates also tip major economies into recession, cutting demand for the commodity.

Commenting on the trends in a recent interview, Finance and Economic Planning Minister Sosten Gwengwe said the government was excited with the downward trend in international oil prices.

“Our hope is that the downward trend continues.

“If it does, then the government will continue adjusting prices accordingly and the expectation is that retailers should also pass on the savings to consumers by reducing commodity prices,” Gwengwe said.

A sharp rise in international oil prices was among the major drivers of consumer prices in the first half of the year, as merchants factored in rising transport costs into the pricing model.