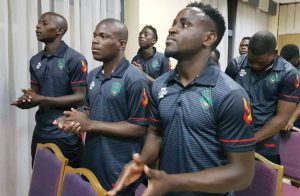 Malawi national football team players and officials abandoned their football boots for their Bibles on Wednesday night, seeking God’s intervention in their 2019 Africa Cup of Nations qualifier against Cameroon.

Malawi and Cameroon meet today with the Flames desperate for a win after two back-to-back losses to Morocco and Kenya.

The Flames held a 40-minute prayer session as they sought divine help to stop their hosts, who top Group B with four points.

Vice Team Manager Aubrey Nankhuni led the session and based his preaching on the story of David and Goliath which, he said, depicts the Malawi and Cameroon scenario.

Nankhuni said, after all the hard work in training, the players must believe in themselves and have faith in God’s miracles.

“First of all, we must accept the challenge in front of us and then have faith that we can do the impossible. That is when God will come in. It should begin with us. I also preached about love. This is a group of 30 people but we must realise that we are one.

“We must be united and love each other. Where there is love, unity and faith, God will always be there for us. Just like what happened with David, no one is giving us a chance against Cameroon. But the Bible tells us that, with self belief and God’s guidance, everything is possible. We must work hard and believe that we will do wonders against African champions Cameroon,” Nankhuni said.

Flipping the script of maternal afflictions