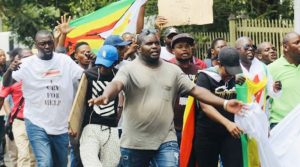 Ministry of Trade and Tourism has said protests that have rocked Zimbabwe have not, in any way, affected trade between Malawi and its main trading partner, South Africa.

Both countries use the Zimbabwe route to transport their goods and services.

The ministry’s spokesperson, Mayeso Msokera, said Malawian transporters are able to pass through Zimbabwe despite the riots which have rocked that country in recent weeks because security has been tightened.

Msokera said, since the protests erupted in Zimbabwe last week on Monday, no Malawian transporter has been attacked because the Zimbabwean government has tightened security for international operators.

The protests have been sparked by the Zimbabwean government’s announcement of petrol and diesel price hike by 150 percent.

The strike sent shivers down the spine of local transporters, who started using a longer route to South Africa which passes through Zambia.

The route is estimated to be about 3,000 kilometres— over 800 kilometers more than 2,244 kilometre distance which is covered between Malawi and South Africa via Zimbabwe.

Road Transport Operators Association Executive Director, Chrissy Flao Mwale, said there was no access for the transporters because the roads were blocked and trucks were being burnt.

She was worried about the extra costs incurred by the contractors.

Malawi’s exports to South Africa were recorded at $54.722 million (about K40 billion) in 2016, according to figures from Malawi Investment and Trade Centre.

Since protests started two weeks ago, vehicles have been burnt and shops looted by angry protesters.

Zimbabwe rights groups said at least 12 people had been killed and many more beaten by security forces since the protests started.

The United Nations has called on the Zimbabwe government to halt the “excessive use of force” by security forces, amid reports of door-to-door searches and the use of live ammunition.