The Africa Magic Viewer’s Choice Awards (AMVCAs) have proved key for the creative industry on the continent, particularly in uplifting the film industry that is rising to tell the untold stories of Africa.

Since its inception in 2013, AMVCAs have risen to the occasion to motivate players in the film industry by decorating them with various awards in different categories.

In its early years, the platform was dominated by West Africa, with Southern Africa playing second fiddle.

Despite its film industry being in its infancy, Malawi has done exceptionally well in the competition since AMVCAs added the Best Movie – Southern Africa.

With AMVCAs in its seventh edition in 2020, Malawi has managed to win the award twice through filmmaker and actress Joyce Mhango Chavula and veteran filmmaker Shemu Joyah.

Chavula was the one, who made history for the country in 2016 when she became the first Malawian to win an award in AMVCAs with her movie Lilongwe.

The actress also became the first to win the Best Movie –Southern Africa Award which was introduced in 2016 alongside Best Movie for West Africa which went to Chinny Onwugbenu, Genevieve Nnaji and Chichi Nwoko for Road to Yesterday and Best Movie for East Africa won by Elizabeth Michael for Mapenzi.

In 2016, Mhango Chavula triumphed in the category when she beat two South African movies – Ayanda by Sarah Bletcher and Tell Me Sweet Something by Akin Omotosho, both of which had more nominations.

With Mhango Chavula having one nomination for her 89-minute low budget movie which cost her K1.5 million and being drawn against the two South African movies, many people in Malawi never gave the film a chance that it would excel.

The title of the movie Lilongwe is also the name of the country’s capital city where the film was shot and it tells the story of a 13-year old girl who later grows into a beautiful young woman but still haunted by her past.

Mhango Chavula, said the film talks about a very strong woman who had three children from three different men.

“Society says she is a prostitute but she believes she is doing her best to survive. Throughout the story, Lilongwe is saying, don’t judge me, you don’t know my story,” she said.

Some of the actors, who star in the film are Brenda Mselu, who is the lead actress and Joab Chakhaza as the lead actor.

“The film was shot in rural and urban Lilongwe. The title was an inspiration from Onyeka Nwelue, a Nigerian writer who once visited Lilongwe and fell in love with the city and he wanted to do a film but later could not,” Mhango Chavula said.

In 2017, Malawi did not participate as there were no films which were submitted but in 2018 the country returned with Joyah making his own history as the second recipient of the Best Movie –Southern Africa for his film The Road to Sunrise.

Joyah’s The Road to Sunrise outclassed four other films in the category including Nyasaland by Mhango Chavula. The other films were Descent by Awal Abdulfatai, Salute by Philippe Talavera and Jomako Black Democracy by Abraham Kabwe.

The veteran filmmaker, who has also won awards with his two other movies Seasons of a Life and The Last Fishing Boat, said then that he was not sure of winning the award.

The Road to Sunrise was also nominated in the category of Best Overall Movie but it failed to grab the award which went to 18 Hours by Phoebe Ruguru and Joyah’s film shined having also received seven nominations in the Africa Movie Academy Awards (Amaa).

In the film, The Road to Sunrise, exploited by men and ridiculed by the world, two sex workers find hope in each other as they search for the road to redemption.

This year the country has also received a nomination in the same category through a movie – Beautiful Hen Behind the Yao Mountain by Blantyre-based Young Travellers Theatre and if the country manages to win again, it will have done well in terms of dominance in the category of Best Movie – Southern Africa.

The nominees for this year’s AMVCAs in all the 28 categories were announced on February 6 2020.

The seventh AMVCAs this year are being brought to viewers across the continent by Africa Magic in association with MultiChoice and proudly sponsored by Amstel Malta.

Channel Director, Africa Magic, Wangi Mba-Uzoukwu, said the journey to selecting the nominees from over 200 entries received was exciting.

“We are once again reminded of the important role the AMVCAs play in shaping the African film and television narrative,” Mba-Uzoukwu told Africa Magic.

She said since its launch in March 2013, the AMVCAs continues to inspire and celebrate contributions of African filmmakers, actors and industry specialists as they promote the growth of the continent’s film and television industry.

According to Africa Magic, for the seventh edition, awards will be presented in 28 categories, with seven categories open to public voting and 21 being categories to be decided by the AMVCA panel of judges and this year there is an inclusion of a new category, the MultiChoice Talent Factory ( MTF) Award.

The MTF Award targets works produced by young filmmakers from the continent, who are undergoing filmmaking training in academies in Southern Africa. East Africa and West Africa.

In this year’s cohort, Malawi has two representatives namely Chisomo Livason and Mphatso Makamo, who are at the MTF Southern Africa Academy in Zambia.

In the category of Best Movie –Southern Africa, The Beautiful Hen Behind the Yao Mountain is battling it out with Kukuri by Philippe Talavera from Namibia and Dalitso by Abraham Kabwe and Kwacha by Cassie Kabwikta, all from Zambia.

Young Travellers first performed The Beautiful Hen Behind the Yao Mountain for the stage before adapting it for the movie.

The group’s Director, Imran Shaban, said they were happy to be representing the country in 2020 having received their first nomination in AMVCAs.

“The nomination alone is a big achievement for us. The film made strides in 2019 screening at Egyptian Film Festival and Sotambe in Zambia. The film also got selections in festivals in United States of America, Italy, Colombia and United Kingdom among others. In total the film has got selection in more than 27 festivals,” he said.

The film tells the story of a young man by the name of Amadu, who fell in love with a young woman from the Yao Mountain. He later impregnated the woman without knowing that it was his sister.

“I first wrote the play to tell the story in a Malawian way and I thought it could also be better to put it into a movie,” Shaban said.

Mhango Chavula said she was excited that Malawi keeps getting represented in AMVCAs.

“We made our mark twice and I hope we can maintain the steam. I am really happy for Imran and team and wishing them all the best as they represent the nation,” she said.

Mhango Chavula said there was a need to seriously do more to push the film industry.

“But at the same time it is not just about being there every year but rather making good and quality films that will really register us as a force,” she said.

Joyah also said the nomination of The Beautiful Hen Behind the Yao Mountain was great for Malawi.

“We benefit by getting the recognition. Most financiers and institutions are reluctant to support Malawian filmmakers because they think Malawi is not a filmmaking country and so, when we get nominations like these, we are bringing Malawi on the map,” he said.

“One of the reasons why the producers of The Boy Who Harnessed the Wind opted for foreign actors is that we are not known out there. So while the benefits many not be immediate, in the long term it is important that we should be considered as a serious filmmaking country. It is about building a name and a CV for the country,” he said.

In the MultiChoice Talent Factory Award, Southern Africa has two films, Savanna Skies and The Painting. The productions from Southern Africa were done by the previous recipients in which Malawi had Jonathan Kapumba and Chimwemwe Mkwezalamba as representatives.

AMVCA Head of Jury, Femi Odugbemi, feels that Africa is ready to change the narrative about Africa because “we have a global audience, improving skills and a location that is of culture interest”.

“We are excited with the quality of entries. Every project nominated is already good. So we call upon people to go out there and vote for their favourite films now that the nominations are out. So in our selection we will be looking for that something extra or the X factor,” Odugbemi said.

He said AMVCAs were all about celebrating Africa’s untold stories observing that Africa has not been telling its stories with stories of war and poverty dominating. 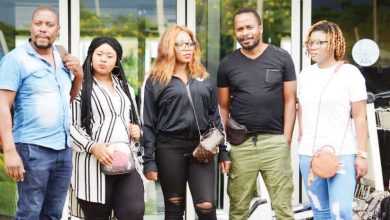