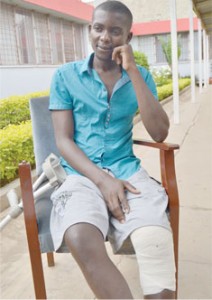 Jere said in an interview yesterday that apart from the K200,000 cash, there were also people who made pledges and that with it, the total would hit K500,000.

“I thank God that the fundraising show went on well, we would have loved to have a huge audience to raise the amount I am looking for but we have made a step,” said the drummer.

Jere is in dire need of over K4 million to undergo an operation for a knee problem at Beit Cure International.

He then hailed all the artists who came to support him during the fundraising and performed for free.

“It’s not easy to perform at a show for free but all the artists who performed on the day got nothing and to them I say thank you for their love and support,” he said.

Jere said some artists were billed to perform but they were caught up in other assignments hence could not make it.

“Black Missionaries excused themselves from the concert due to assignments in Lilongwe likewise Lulu but they made pledges.

“The Great Angels sent in a representative who gave me K30,000. Some artists however, failed to show up,” he said

Due to the knee problem which

he says developed following an infection, Jere has not been performing for months now.

“I am the bread winner, my family depends on me and music is the career that is giving me money to feed my family. But now with my leg problem I cannot perform,” he said.

Jere said he has been to Queen Elizabeth Central Hospital (QECH) for several times where he was told after x-ray that he has a problem of Arthritis.

“Actually I have been visiting QECH because the problem was getting worse and it was then that friends raised some money for me to go to Beit Cure International for consultation,” said the drummer.

According to the quotation which Jere got at Beit Cure, he is expected to undergo an operation with the first phase costing over K1.7 million with the second phase amounting to over K1.3 million.

Jere is one of the few left-footed drummers in the country and the knee problem affected the same leg.

Jere has performed with several bands in the country and they include Body, Mind and Soul, Mapale, Kaligo Melodies and Lulu’s Mathumela Band.