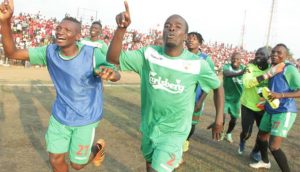 Masters Security produced a masterclass performance to dump defending champions Nyasa Big Bullets out of the Carlsberg Cup after 4-3 victory on post-match penalties before a huge crowd at Civo Stadium in Lilongwe Saturday.

It was party time for Masters as they turned the stadium into a theatre of celebrations as Bullets trooped out crest-fallen. No Carlsberg party for Bullets this season.

Masters will face the winner between Be Forward Wanderers and Hangover United in the final slated for October 20, 2018 at Kamuzu Stadium in Blantyre. Wanderers meet Hangover in the semifinal today.

After enjoying Carlsberg Cup success for three consecutive years with two different clubs, it was over for ‘Mr Carlsberg Cup’, Eliya Kananji, who won the cup with both Bullets and Wanderers.

Goalkeeper Bester Phiri was the hero of the day as he saved two penalties to guide Masters to their first ever cup final. Phiri saved Yamikani Fodya’s decisive penalty after earlier keeping out Bashir Maunde’s spot kick.

Chiukepo Msowoya netted his spot kick after a re-take with Pilirani Zonda and Sankhani Mkandawire also converting theirs. But the game was never short of controversy as referee Gift Chicco made some questionable decisions in open play and during the shoot-outs.

The game ended 1-1 in regulation time after Msowoya gave Bullets an early lead from a controversial penalty but Mkonda equalised for Masters.

It was a game which Masters dominated as Mkonda and Zongololo dictated matters in midfield. Both sides had chances in open play to finish their opponents off but they failed to grab the winner.

Masters Coach Abasi Makawa was the happiest man on the day.

“Nobody gave us a chance but God has done wonders for us. They tried all their tricks to win the match through the back door but it did not work. I am very excited,” Makawa said.

Bullets assistant Coach Kananji was dejected and admitted that his side struggled.

“It was a bad day for us. We struggled in the first half and improved a bit in the second. But we have accepted the outcome of the match and we have to focus on the league,” he said.