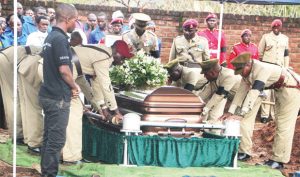 The body of Mathews Chikaonda was laid to rest Monday at his home village of Tembetembe in Mtakataka, Dedza District.

Despite heavy rains, people from all walks of lives went to pay their last respects to the former Reserve Bank governor and finance minister.

In their eulogies, many speakers spoke highly of Chikaonda’s commitment and support to the community as well as the nation at large. 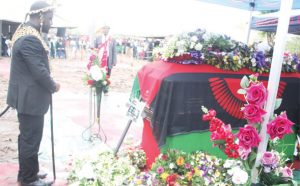 Tembenu, who represented President Peter Mutharika, said the country has lost a renowned economist and business guru who contributed immensely to the country’s social and economic development.

“Whatever he could do registered a measurable and considerable success. He was a strong believer in team-work. He touched the lives of many and devouted his life to serving his country with utmost dedication,” he said.

“We will greatly miss him for his economic insights and his golden heart. He had visionary leadership; always reminding us of the need to look after the welfare of the people. The group [Press] is what it is today because of his commitment and dedication,” he said.

Chikaonda, according to people in his area, not only contributed to national development but also reached out to many in his community.

Inkosi ya Makosi Gomani V said Chikaonda contributed to the promotion of culture and provided support to the community.

He was laid to rest with full military honours as a way of remembering his commitment and contribution to the country.

Born in 1954, Chikaonda died on October 30 2018 in the United States after battling with cancer.

Before his death, he served Press Trust Corporation until he retired.

He is survived by three children and a wife.