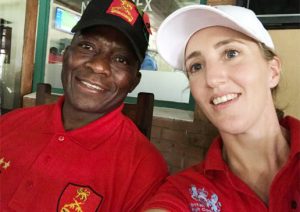 Several companies and individuals contributed towards the good cause. Proceeds of the competition will go towards the welfare of the soldiers who fought in the Second World War.

In her remarks, Tett hailed the strong relations that exist between MDF and the British Army. Supuni- Phiri hailed companies and individuals for contributing towards the noble cause.

He paid tribute to the brave soldiers who sacrificed their lives for the country during the first and second world wars.

“There is need for unity and shared commitment to help our war veterans. Their burdens and that of their families are extreme, so let us all support them,” Supuni-Phiri said.

The country’s top soldier said he was happy that the number of golfers who took part in the event increased compared to last year.

It was the first time for golfers from Blantyre to take part in the competition, which had about 250 competitors this year.

Most of Malawi’s war veterans are in memorial homes at Cobbe Barracks in Zomba, Lilongwe’s Kamuzu Barracks and at Moyale Barracks in Mzuzu, with many others in dire need across the country.