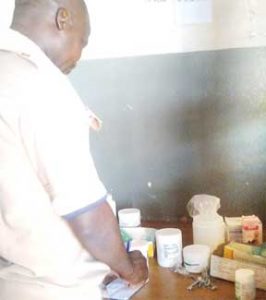 Kwitanda Health Centre in Balaka district has gone a week without providing services to patients after the medical assistant closed the clinic for Christmas holidays.

Patients have been gathering and waiting at the facility hoping to get treatment only to give up after hearing the news that the health worker, the most senior clinician at the facility, had gone on Christmas holiday.

Therefore, patients have had to walk over 10 kilometres Chiyendausiku health centre for medical attention.

The Kwitanda facility has a catchment area of 27, 230 people and it serves eight villages.

The medical assistant, Chikumbutso Malinga, closed the health centre on Friday, December 24, 2016 at around mid day and told other members of staff that he was going to Balaka District Health Office (DHO) for a meeting, but had not returned as of Thursday this week.

“He has been here for four years. He had been dedicated all along until August this year when he suddenly developed a habit of closing the facility every Friday at mid day.

“He claims that he is attending meetings and the clinic reopens on Tuesday at around nine or 10 am,” said vice chairperson for the facility’s Health Advisory Committee (Hac), Rose Mwanyali.

She said the facility has three nurses who work alongside the medical assistant. In his absence, the nurses do not examine the patients.

“When the medical assistant leaves, the other nurses also don’t work. One of the nurses is new and she is the only one that sticks around but she is not conversant with the operations of this place. For example, she has been around this whole week but she couldn’t assist,” Mwanyali said.

A team of journalists on a Foundation for Community Support Services (Focus) media tour arrived at the health centre at around 11 am on Thursday and found a lot of people awaiting treatment.

But whilst the media team was in a meeting in the under-five room, a hospital attendant ‘examined’ the desperate patients and administered drugs to them.

One of the guardians, Konesta Nantchengwa of Namputu village, Traditional Authority Nsamala in Balaka said she had been going to the facility with her child since Monday but only received medical care Thursday.

“She had high fever and sores in the mouth and lips. I couldn’t walk to Chiendausiku in this hot sun with a seven year old child on my back. We waited in hope,” she said, not minding that it was a facility attendant that examined her daughter.

She said: “At least she has received medication unlike the previous days.”

Another patient, Rhoda Glaciano of the same village said she was discouraged to go to the facility after she heard that people spent the whole day without being attended to.

“I have been unwell since Monday. I was discouraged to come here. I used some natural remedies until I couldn’t handle it anymore. Luckily I have received some medication today,” she said.

Some Balaka DHO officials indicated that the Health Advisory Committee of the area raised the issue at one of the meetings last Saturday (December 24, 2016) and the issue was referred back to the committee to handle before taking any disciplinary action.

“It appears Hac of this area didn’t know that they are empowered to question the MA’s actions. They were advised to first talk to him. If it fails, they should make a report to the DHO for further action,” said one official.

But District Medical Officer (DMO) for Balaka DHO, Doctor Leonard Chafewa said his office is not aware of this issue.

“At every facility, we have a committee that looks into discipline of health workers in line with the civil service’s rules and regulations. So the ombudsman of this health facility hasn’t reported anything of this sort to us,” he said.

However, communities said the issue is widespread in most health facilities of the district but the DMO’s office has been ignoring it because the medical assistant in question accepted to work in the hard-to-reach area where most health workers refuse to go.

Executive Director for Focus, Kossam Munthali said it is very unfortunate that this has been happening since August but no one took action.

“We should think of patients especially children that come in critical state. How many lives have we lost due to this negligence?

“Balaka DHO should take this as a matter of urgency, otherwise we will end up losing more lives,” he said, adding that every life is valuable.

Government granted a Christmas and New Year holiday to all public servants except those in critical service sectors such as health and security.