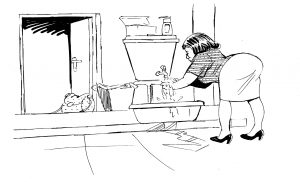 It is now common practice to find buckets full of water right by the entrance of most business premises in the wake of the threat posed by Covid-19 to our country. Please, that bucket and accompanying hand sanitiser are not there for decoration, ladies and gentlemen; make full use of them by washing your hands regularly, lest we be wiped clean by the deadly coronavirus.

I was almost in shock the other day when a video emerged of a person in Kasungu District dipping his hands in a basin full of dirty water beneath a carefully placed bucket of clean water and soap.

And then, we have in our midst some careless motor vehicle drivers who might be tempted to knock that bucket down. Please do not dare. We do not wish to see any of our own destroyed by Covid-19.

I shudder at the thought of truck drivers who criss-cross different borders, including ours, as they help keep our economies afloat by moving much needed cargo to spur the industry, and with it, carry the huge risk of contracting the virus which has already hit a number of countries on the African continent such as South Africa, Zimbabwe, Tanzania, Zambia and Mozambique; you can already see beneath the lines the point I am trying to put across; it is pertinent that we be extra careful.

This is why I wish to applaud President Peter Mutharika for rising to the occasion, albeit delayed, to announce some preventive measures that the country has to observe in the wake of the Covid-19 threat. I know that with the ban on gatherings of more than 100 people, those that had already planned and spent on their engagements, weddings etcetera must be seething with rage. I wonder how it will be during funerals since the same ban applies

If you think that is the worst possible case, wait till you see developments in the coming weeks in light of the lockdown announced by a number of world economies, some of which our very country depends upon; for instance, London, New York, Los Angeles and even India. South Africa was also set to go on lockdown as of Thursday night (March 26) and a number of countries in Europe are taking a similar approach.

Now, what that means is that even the very cheap products that some countries were ‘dumping’ on African countries, including Malawi, will become scarce. Even raw materials that some companies in the country have to import will not be easily sourced.

Away from coronavirus, it appears we are still dealing with some complex issues of our own here at home in the form of political lockdown. On one hand, we have a Malawi Electoral Commission (Mec) Chairperson Jane Ansah and her team who do not want to back down, even after the courts and Parliament found them wanting in the manner in which the results of the nullified May 21 2019 presidential election was handled. Instead, Ansah and team have gone ahead to inaugurate the next step in as far as the holding of fresh presidential election is concerned, in tandem with the February 03 2020 Constitutional Court ruling. The funny thing is that the esteem lady of the bar would want to ‘pick and choose’ (literally and not the departed cousin to this column) on what to adhere to and what to discard, in as far as that landmark judgement is concerned. It was the very same Constitutional Court that ordered Parliament to assess the capabilities and competencies of the commissioners after observing the gross irregularities in the nullified 2019 poll.

On the other hand, we have a President who doubled as a defendant during the presidential case in court, and within a blink of an eye, refused to get rid of the Mec commissioners upon recommendation of Parliament, and equally tossed out of the window proposed laws by Parliament. Clearly, this stand-off cannot continue if our beautiful nation is to progress. Without necessarily wanting to sound judgmental but it is a must that everyone follows the law to the latter since we claim that everyone is equal before the law.

And then we have an opposition that seemed to have it all worked out and came together to forge an alliance with a view of enhancing their chances during the planned fresh presidential election but alas! It is the very same team of commissioners they very much want to have nothing to do with the election that is bent on managing the next election and even has the audacity to announce fresh date and not the one which had been chosen by Parliament. There surely has to be a solution to all of this.