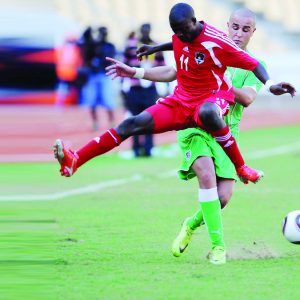 The 32-year-old striker, who started his football career in his home village with Kraad Eagles in 2005, tops the chart with 22 goals in 79 matches for Flames in all competitions followed by legendary Essau Kanyenda on 21 goals, a snap survey has revealed.

The details, which have been compiled from various internet outlets and Football Association of Malawi (Fam) information desk, shows that Orlando Pirates striker Gabadinho Mhango is third having scored 10 goals. Msowoya does not have account of the games he has played and goals scored on national duty.

“It is not easy to be among the top goal scorers for Flames. I do not know exactly how many games I have played for Malawi but I scored some goals,” said the former Pirates forward.

Msowoya, who made his debut for Flames around 2008, helped the senior side to qualify for the 2010 Africa Cup of Nations (Afcon) finals when he scored six goals including the famous 1-0 winner over Egypt at Kamuzu Stadium.

Then, he made most of the appearances as a substitute as Flames had Kanyenda and Russell Mwafulirwa upfront.

Msowoya’s chances of increasing his goal tally for Flames appears slim as he is mostly overlooked nowadays. Age is not on his side as well.

Kanyenda retired from active football after scoring 21 goals in all competitions, three goals were scored in the Cosafa Cup.

Kanyenda, who made debut for Flames against Zambia on March 12 in 2000, also scored 43 goals in the Premier Soccer League (PSL) in 92 matches. While both Kanyenda and Msowoya top the chart, Mhango is Flames all time goal scorer in the Cosafa Cup with five goals.

Fam Compliance Manager, Casper Jangale, who also helped with some data, admitted that Msowoya and Kanyenda were best strikers since 2000.

Overall, Kinnah tops the scorers chart followed by another legend Lawrence Waya with 27 goals from 125 matches. Late Frank Sinalo is third having netted 25 goals for Flames in 71 matches whereas Stock Dandize with 23 goals.

Msowoya is fifth all time Flames top scorer with 22 goals whereas Kanyenda is sixth with 21 goals. Records show that Peterkins Kayira and Yasin Osman are some of strikers who also reached 20 goalmark for Flames.

Chimodzi is still the highest scoring defender for the Flames with 11 goals. His record is also better than of Atusaye Nyondo and John Maduka, who each scored 10 goals for Malawi.

Who are you to criticise?