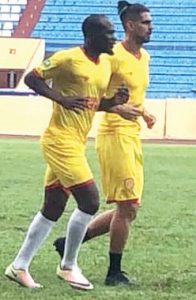 Civil Sporting club attacker Muhammad Sulumba, who is undergoing trials at Vietnam League 1 side, Nam Dinh FC, scored a brace in one of his team’s friendly matches.

Sulumba hit a brace when his side defeated Ha Tinh 3-0 on Friday before losing to Saigon FC 1-0 on Sunday.

The former Nyasa Big Bullets and Be Forward Wanderers player said he has played two friendly matches for Dinh in his quest to earn a contract.

“I started the trials on Wednesday last week and we had a friendly match on Friday where I scored two goals. I was also given a chance to play during the 1-0 loss against Saigon. All is going on well here and we have another friendly match on Tuesday [today] so I am looking forward for it,” he said.

Sulumba’s trials at Dinh will end on Monday and if successful he will join the club as a free agent following the expiry of his one year deal with the Civil.

The former Polokwane city player rated his chances of securing a deal as high.

“I am working hard and I have no doubt that I will make it. I must say that the game of football here is more advanced and they play a fast game,” Sulumba said.

Dinh was founded in 1965 and finished on position 11 with 31 points from 26 matches last season.