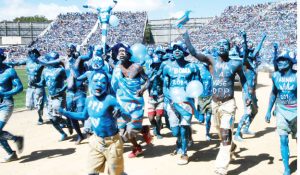 “Jesus answered, ‘You would have no power over me if it were not given to you from above. Therefore, the one who handed me over to you is guilty of a greater sin’,”—John 19 verse 11—

If it was not 2010, it must have been in 2011 when Bingu wa Mutharika became desperate and started looking for people to shield him from the wave of political attacks and piercing criticism of his unfortunate mismanagement of the country which characterised his last days.

It was at Kamuzu Stadium—at least this I remember— where Bingu executively elevated party ruffians to a much more respectable title of cadets. My basic lexicon attaches the title “cadet” to a military trainee or, in ancient days, a younger member of a royal family. Sadly, Bingu is now pushing up the daisies and none of us is best placed to, on behalf of Bingu, tell us what he wanted his cadets to be modeled after.

After Bingu’s demise, the title ‘cadet’ has become an attachment to any youth— decent or uncouth—who pays allegiance to the Democratic Progressive Party (DPP). To put it in raw terms, people have now developed a curious fear for the word or title ‘cadet’ and most would prefer lurking in the undergrowth of overgrown national issues other than popping their heads up and in the process pricking on the raw nerves of the so called terror that has become to be known as cadets.

On more than one occasion, I have heard and overheard people—some of whom hold higher positions and have security detail to boot—confessing how they are always moving around looking over their shoulders for fear of being attacked by cadets.

Listening to the people who cower at the title ‘cadet’, a stranger in town would think ‘cadets’ are some sophisticated navy seals or a reincarnation of the Taliban—that extremist grouping which made hell of Afghanistan—and have all the power of life and death.

Pages of history are replete with groupings that have done nothing other than oversee a reign of terror firmed by their bond to the ruling party. But these do not last forever. Never. Hitler’s Youth are buried in the rubble of infamy, the once-upon-a-time Youth Leaguers are now footnotes on a nation’s gory chapters while the erstwhile mighty and untouchable Young Democrats are now soaked rats peeping through the crevices. Time, as they say, is a savage.

Just like those who came before them, the current crop of cadets have an illusion that the world started and will end with them. Power has this curse that shortens foresight. Power allows us to swim in the vast sea of illusion thinking we are gods and all must approach us with rehearsed deference.

As a nation, we need a vigorously exorcism of a demon that chains us to a perpetual life of fear of mortals who bleed scarlet as we all do.

Sadly, our national culture of cowardice has a permanent reservoir in high offices and it—instead of at least trickling to us—floods in the national psyche. That is why we allow a small group of people become some demi-gods to who we all must bow.

It is not such a big ask and there is no that kind of revolutionary spirit that we all must wake up to the truth that these people we have inadvertently or consciously elevated to gods are just mortals just like you and I. These too must abide by the laws just like you and I do and must never frighten our existence in this free world.

Regrettably, most of us have decided to squeeze ourselves in the nooks of cowardice and all we do is complain in hush tones as we peep through while our country is being defiled. As for me, I refuse to sacrifice posterity on the altar of national cowardice.