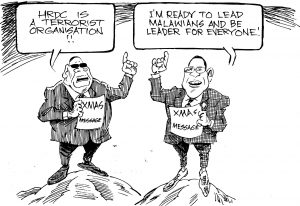 If there is something that has dominated discourses on how Malawians should conduct themselves after the Constitutional Court makes its ruling on the presidential elections results case, then it is persistent appeals for peace and calm.

All manner of people including religious leaders and the judges themselves who are handling the case have urged political party leaders involved to prepare for any possible outcome because, whatever the case, there will be one side winning.

The judges further put it to the parties at variance to consider taking grievances with the judgement to the Supreme Court, a direction which has also been suggested by the Malawi Law Society.

But the latest messages coming from leaders on both the petitioners and respondents’ sides are not inspiring any hope that they want peace to ultimately reign beyond the court ruling.

We all know that there is a lot at stake as far as this case is concerned and not everyone fighting to remain in control or to gain control of State affairs is doing that for the love of the country.

Others want to continue pillaging the country’s resources and will do all it can take to remain in power. They are not willing to lose that grip to anyone.

But, of course, there are the good ones—those who really fight for our better lives.

That is why the case is very important in the country’s history, democracy, politics and psyche. The fact that it is successfully going through the courts is also something that, in its own, should be celebrated.

Some important precedent has been set and future litigants and judges will obviously be referring to it whatever way it goes.

It is so much at the centre of the country’s progress that everyone involved should be careful with their words which relate to it.

Of course, they are also supposed to preach peace and tranquillity, important elements that Malawi needs beyond the court’s verdict.

Well, it may not be so much about peace but their words simply erased all their previous sentiments that they are for unity.

Traditionally, a New Year message is supposed to inspire hope. It is supposed to be more positive and parry away all the negativities that might have permeated the year going by.

But Mutharika found the moment a fertile one for reviving his attacks on human rights defenders whom it has always been clear he does not fancy.

The sad reality—to the President—is that in our democratic dispensation, human rights activists will always be there, whether one likes them or not. It may not be Timothy Mtambo, Gift Trapence or Billy Mayaya.

That is why the President missed it when he attacked the activists by branding them as terrorists. We all know the demonstrations that they championed were simply a reaction to what some Malawians were seeking that is why they poured into the streets in those large numbers.

In fact, there were other places where, even without the activists doing anything, citizens demonstrated and achieved just what they wanted.

Peace is paramount and the President should have used his Christmas message to buttress his appeal and show the world that he is not some temperamental leader who says one thing today and says the opposite the next day.

And even Chakwera did not help matters.

While, as a petitioner in the case, he must be positive about the outcome, the MCP leader exuded undue confidence when he declared that in the event that the court nullifies the May 21 presidential poll, he is ready to lead Malawians and be a leader for everyone regardless of their political affiliations.

Nullification itself does not straightforwardly guarantee that the MCP leader will eventually emerge victorious.

In any case, judges must be left to analyse the evidence presented before them without anything that may be deemed to put pressure on them.

Of course, we have confidence in the five judges and in what they said, that they will not be swayed by public opinion in making their determination, but still, it is important to exercise caution in how both petitioners and respondents comment on matters related to the case.

What Mutharika and Chakwera said in their New Year messages did not reflect what the nation needs at this critical time in its history.

We have entered the New Year with problems our leaders should have left behind.

Sports Complex race on May 13