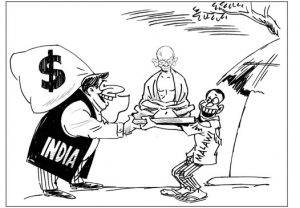 The government granted permission to the Indian High Commission to erect a statue of India’s independence fighter the late Mahatma Gandhi at a prime location near Queen Elizabeth Central Hospital in Blantyre.

Since this was known to Malawians, opinion has been divided and there is a group that getting signatures for a petition to oppose the erection of the statue, arguing it is meaningless to Malawi and that Gandhi held the black race in utter contempt, calling them Kafirs who could not be banded together with Indians in the then apartheid South Africa where he lived for 21 years.

Sensing that probably it is losing the argument, government through Ministry of Foreign Affairs issued a statement last week, in which it justifies the statue on the basis that the country is enjoying support from the Indian government in various sectors.

Former vice-president Cassim Chilumpha has weighed in on the debate, saying government must listen to its people and stop erecting the statue at a prime location in Ginnery Corner.

It is clear government is justifying its decision to allow the erection of the statue on the fact that India has been helping Malawians in various sectors since the attainment of independence in 1964.

The press statement even lists development initiatives that include credit lines and grants for various projects including the Likhubula Blantyre Water Project, sugar processing plant in Salima, fuel reservoirs and agricultural equipment.

Coming together with the statue is a convention centre which India has pledged to build for Blantyre City Council opposite the Town Hall and it is one of the eight that India is building in eight African countries where the Asian economic giant is also erecting the Gandhi statue.

Simply put, the reason Blantyre will have a Gandhi statue, in the view of the government, is that India helps Malawi and there is no other value to Malawians.

You ask any Malawian randomly on the streets who Mahatma Gandhi was and whether he is relevant to Malawians to deserve a statue among us, chances are that many of them would be in the dark.

Simply put, there is no meaning of the statue among Malawians apart from the government placating a rich donor after it asked to have the presence of a statue of its icon here.

But for India, the statue means a lot as it achieves its foreign policy objective of cultural imperialism.

India wants to feel good and conquer the world through the export of its ideals that manifest themselves through the lives of its icons such as the late Mahatma Gandhi.

As for us, Malawians, we are getting the statue because of poverty as we cannot stand up to anybody who gives us things— beggars do not choose!

Gandhi was leader of Indian Independence movement against British rule starting from early 1920s to 1940s until India became independent in 1948 and this had nothing to do with Malawi.

Yes, he employed non-violence and civil disobedience as tools for achieving various things that he wanted from the British to emancipate his people.

But the press release from the Ministry of Foreign Affairs should not cheat us that he influenced our own freedom fighters during the fight for independence.

There is no iota of evidence to back this and our struggle for independence from the British was as violent as many struggles for freedom in the whole of Africa.

Gandhi lived in South Africa for 21 years where he developed his own political views, ethics and politics until he went back to India where he assumed the leadership of India National Congress Party and fought against various ills perpetuated by the British until independence in 1948.

But, again I cannot see how this is relevant to Malawi and how it can inspire anybody here as they look at the Gandhi statue.

During a speech in September 1896, Gandhi complained that the whites in the British colony of South Africa were degrading Indian Hindus and Muslims to “a level of Kafir” – meaning black Africans.

Scholars say this is outright evidence that Gandhi was a racist. How then can such a person inspire anybody in an African hinterland like Malawi?

Is this what the Indian government would like us to feel good and great about their country hence the statue in our midst?

The Gandhi statue is senseless in Malawi and a mockery to our heroes that deserve honour and reverence for the role they played for the very survival of this nation.

We only have the statue of founding president the late Dr Hastings Kamuzu Banda in Lilongwe when so many, such as Masauko Chipembere, Orton Chirwa, Gwanda Chakuamba and the list is endless, fought for our independence.

Others even died in the struggle.

Then you have multiparty system of government heroes such as Chakufwa Chihana and Catholic bishops such as the late Archbishop James Chiona and other bishops who authored the seminal 1992 pastoral letter which started agitation for multiparty democracy we are enjoying today.

These and others which I have not been able to remember here deserve recognition which we have not given them.

Instead, we, as a nation, are honouring foreigners we do not know and whose views on Africans are as questionable as Gandhi’s.

In the final analysis, the government should learn to consult its people before engaging in divisive activities such as erection of statues of questionable individuals when we have heroes that we can immortalise.

As for us, as Malawians, let us work hard to develop our country so that we can achieve true economic independence.

When you are a beggar and poor, you receive everything and anything as the present scenario shows. You lose pride and dignity.

We might be independent politically but, economically, we are not as others will give us things and attach funny conditions to it.

Suspects left to rot in jail

Forced to turn to dangerous waters