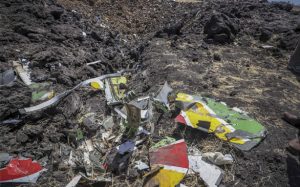 Malawi Airlines has said there is, so far, no Malawian among the 151 passengers aboard their partner company Ethiopian Airlines’ flight which crashed while travelling from Ethiopia to Kenya Sunday.

Malawi Airlines spokesperson, Joseph Josiah, Sunday said they were monitoring the unfolding events involving Ethiopian Airlines, which has a 49 percent stake in the Malawi flag carrier.

Malawi Airlines emerged from the ashes of Air Malawi which disbanded.

“We do not have much information. We are trying to follow up on the issue,” Josiah said about the Boeing 737 Max 8 flight registration number ET-AVJ 302.

Ministry of Transport and Public Works spokesperson, James Chakwera, Sunday seemed to agree with Josiah on the tragedy which has cost lives of nationals from 36 countries across the world.

“From the list we have, there is, so far, no Malawians involved, probably because Malawians would be coming to Lilongwe and this flight was going to Nairobi. The closest to a Malawians on the list is that of a Mozambican,” Chakwera said.

BBC reports that other passengers on board were a Mozambican, Ugandan, Israeli, Sudanese, Norwegian, Yemen, Belgian, three Russians, four Indians, four Dutch nationals, six Egyptians and seven French nationals. Identities of two passengers are yet to be established.

Ethiopian Airlines Chief Executive Officer, Tewolde Gebremariam, was quoted saying the captain of the crashed plane had told controllers at Bole airport that he was having difficulty and wanted to return, and that he had been given clearance.

He also said the plane had arrived on Sunday morning from South Africa.

“[The] plane had more than three hours of ground time after coming from South Africa, it arrived with no remark and was dispatched with no remark,” Gebremariam told BBC.