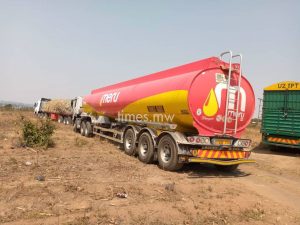 Authority (Mera) Wednesday issued a statement assuring the public that it has enough stocks of fuel, including petrol and diesel that would last 28 and 54 days, respectively.

The statement comes amid panic-buying in some parts of the country due to the anticipated fuel scarcity as a result of the pullout of vehicles by truck owners under Transporters Association of Malawi, who joined the truck drivers’ strike which started on Monday.

In a statement, Mera says efforts were being made to send the commodity to filling stations that had run out of the commodity.

“There is a total of 22 million and 32 million litres of petrol and diesel, respectively,” the statement reads.

Professional Drivers Union and Truck Drivers Association called on its members to start taking a peaceful industrial action on Monday until the government meets conditions they agreed upon earlier on.

The truck drivers are demanding a salary increment of not less than K140,000 per month from their employers and that government should priotise giving businesses to local transporters.

In Mzuzu, the members started blocking vehicles, including fuel tankers, around 7am, forcing drivers to park their vehicles along the M1 Road.

Police were deployed to strategic places around the industrial area to ensure peaceful protest.

Nothern Region’s union spokesperson Chisomo Chipeta said their grievances were long-standing, adding it has always been rhetoric on the part of the government and their employers.

“We discussed this with the government, which promised that things would change by August 1 this year. However, we have noticed that nothing is working. We don’t have business because local vehicles are not being given business, some drivers are still getting less than K140,000 and there are other challenges that need to be looked into,” Msiska said.

Meanwhile, two trucks carrying 36,000 litres of milk each were detained by the striking drivers at lunch hour in Lilongwe on Monday, causing the milk to perish.

In Blantyre, at Kameza, 80 trucks have been detained by protestors for not complying with the request by the protestors that transporters cease operations until government gives in to their demand.

Fuel Transporters Association of Malawi Executive Member Shiraz Omar said they resolved to pull out from the road all their vehicles.

“It is not our wish that we should join the drivers’ strike but we have been left with no choice because, if they drivers are striking, obviously, we are not going to move,” Omar said.

Homeland Security Minister Richard Chimwendo Banda acknowledged that the truck drivers raised three issues that the government has since addressed.

He said, on September 27, it gazetted a law reducing the price of a 48-page passport for international truck drivers from K120,000 to K60,000, apart from gazzeting another one removing the Covid status certificate fee of K30,000.

“But because they complained that some DHOs [District Health Officers] were not respecting it [K30,000 fee removal], we have done it from the Ministry of Health headquarters,” Banda said.

Chimwendo Banda added that they had gazetted that the minimum wage for international truck drivers be at least K140,000.