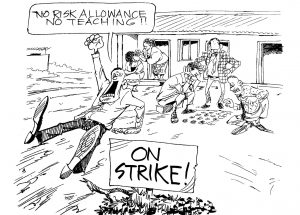 Teachers in public schools, who kept staying away from class even when their demand for Covid-19 risk allowances should have completely stopped making an ounce of sense, suspended the stay-away after reaching a deal for continued negotiations with the government.

The government had gone to court to obtain an injunction against the strike and an inter partes hearing was supposed to take place on Monday.

Instead, the two sides agreed to continue with the negotiations while the teachers are at work. This was after the government had indicated in no uncertain terms that it was not going to provide any risk allowances—in whatever form—to the teachers, who are not designated in the pandemic’s high-risk category.

The government had also announced plans to stop deducting the K500 monthly contributions that teachers make to their body, Teachers Union of Malawi (Tum).

It was becoming very clear that Tum was no longer interested in reason and only chose to pursue a bizarre agenda through demands which did not make any sense.

It was only necessary for the government to hit back at Tum through its own tactics since the union could not clearly justify why its members were not working when, if it were true that they wanted protection from Covid-19, they should have rushed to get the vaccine which some of us had not hesitated to get.

But, then, it was very clear that the teachers were not really fighting for protection; they were simply pushing for something to add on to what they get every month because it is not enough.

From the very beginning of the strike, some of us had posited that teachers were not fighting a legitimate battle. Their demand for risk allowances— now cloaked personal protective equipment money—has never made sense because science had not indicated they are workers in the high-risk category.

So, the government was absolutely right to threaten that it would withhold salaries of teachers who failed to return to work this week.

It was plainly preposterous to continue staying away from work without a proven valid reason and expect to get paid at the end of the month.

Now, as the negotiations continue, the government must clearly put it to Tum that the demand for risk allowances, even when we have vaccines in the country, is a non-starter just like it has always been.

Hopefully, the negotiations will border on something different from the risk allowances matter. They should also avail for the government better ways or resolving impasses like the one that the demand for risk allowances created.

The government, as an employer, should have learnt something from the saga and how it can act when it feels its rights are being violated by the employee.

The challenge we have when it comes to government employees making demands, even those that are senseless, is that we have for so long held that every demand must be met.

The government has always been taken as a compliant employer who cannot reject the demands of employees. Such an attitude has to change. The employer’s rights must be respected as much as those of the employee.

Of course, this is not to imply frustrated government workers should not engage in actions they deem fit for registering their grievances. But unionism must be expressed within the laid-down labour laws and where it is being abused, necessary actions must be undertaken.

If an employee engages in an industrial action based on premises that have been declared invalid by relevant experts, leaving such an employee scot-free would be setting a very bad precedent.

Everyone must account for whatever they do if this country were to move forward. For a long time, we have clapped hands at some very ridiculous demands, like those that were being made by teachers, as long as they are targeting the government.

All in all, the strike by teachers has been called off and there are important lessons both sides need to learn.

There are also lessons other public officers, who feel they can squeeze the government to a tight corner even when they do not have compelling reasons, can learn.

An employer’s rights should not matter less.