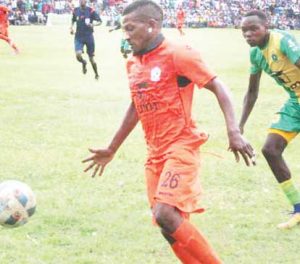 Be Forward Wanderers are sick and tired of the local media’s continued focus on the happenings at Lali Lubani Road.

The TNM Super League champions want to be left alone to mind their own business.

To quote General Secretary, Mike Butao, there are 15 other teams in the Super League; hence, it is unfair for the media to place their microscope on just the Nomads.

“There are 16 teams in the Super League and it gives us no pleasure to be in the news every single day for all the wrong reasons. So, I would urge the media to allow us time and space to address these issues once and for all. Until then, I will not comment on these issues,” Butao told The Nation edition of February 28 2018.

Why always Nomads? However, compared to other teams in the Super League, the rate at which cases of indiscipline are unfolding at Wanderers is so alarming.

The media cannot turn a blind eye to the chaos that is descending on the camp of the best team on the land.

Wanderers have never been an ordinary team. All Super League teams are equal but others are more equal.

When a player for a team such as Mafco gets injured, it is unlikely to be big news. But when the same happens to a player for Wanderers, Nyasa Big Bullets and Silver Strikers, it is big news for the simple reason that the big three have won many trophies compared to the rest who have only won one or two trophies in their history.

Nomads are victims of their own high profile, success, pride and expectations their fans and the public have in them.

Wanderers cannot compare themselves to another team. Apart from Bullets, no other team contributes more players to the national team. In their squad, they have former and current Flames stars who are role models. At bare minimum, they are supposed to behave.

It was not the fault of the media that Wanderers’ leading league scorer for the 2017 season, Esau Kanyenda, reported late for camp when the team had stepped up preparations for the 2018 Caf Champions League game against AS Vita of the Democratic Republic of Congo.

Paul Pogba cannot choose to attend to private business in France when Manchester United are in camp, and expect the media to leave the Red Devils alone. Pogba is a big star than other players for a team such as Swansea.

Before that incident involving Kanyenda, Jafali Chande courted controversy for himself and Wanderers when he had an altercation last December in the build up to the crucial Super League game against Mzuni FC. Since that time, Chande has been absent without official leave.

Now, it is crazy expecting the media not to question the whereabouts of such a star player. “It is true that there were some altercations between Chande and his fellow players prior to the Mzuni game in December. These are normal, though unwelcome, occurrences when people work in large groups. We have tried our best to address this issue but Chande still does not report for training,” The Daily Times of February 28 2017 quoted Butao as saying.

In another saga, it was not the fault of the media that Flames right-back, Stanley Sanudi, when Nomads were licking wounds of the 4-0 away defeat to Vita, chose to, after returning home, capture a video clip of himself bragging about the money he brought back from the Kinshasa trip.

Butao condemned Sanudi’s actions through a press release, saying the player was creating a wrong impression when the team was desperate for financial support.

“We are busy looking for assistance from well-wishers and it is strange and incomprehensible for somebody to use personal money to send a wrong message to our potential donors and to Malawians,” Butao stated in the press release.

Sanudi displayed his antics on social media, so how can the main stream media be blamed? While the Nomads were grappling with the Chande and Sanudi issues, some irresponsible Wanderers players decided to leak a conversation the then captain Joseph Kamwendo had in the team’s bus, alleging that some players were ganging up to have him removed in favour of Kanyenda.

In reaction, Kanyenda resigned with Kamwendo following suit after management decided to have Alfred Manyozo Junior as the new skipper for the 2018 season.

The incidents of Chande, Kanyenda and Kamwendo all sum up one thing—there is ill discipline at Wanderers due to player-power which the Executive Committee must deal with before things get out of hand.

Wanderers must not bow down to indiscipline of senior players who can decide when and how to report for camp training and threaten to quit when they know pretty well that they have running contracts.

In the Bullets’ camp, Fischer Kondowe tried the same by announcing that he had quit.

Bullets officials accepted the winger’s resignation and he came back begging to be accepted back. No player is bigger than a club and as long as Wanderers continue to tolerate indiscipline just because other players are stars, they can as well expect to wait another 11 years to win the league championship.

Wanderers’ former star attacker Albert Mpinganjira summed it all up Friday on Times Television. “The players are being childish and immature. A captain is supposed to be a bridge between players, the Executive Committee and the technical panel. Such a role demands maturity. Before one decides to quit, you discuss things internally. A team cannot perform when there is no unity,” he said.

Mpinganjira was seen as a troublesome player while at his peak at Wanderers but he never made public pronouncements that he was quitting. It shows how internal conflict resolution and discipline were paramount in those days at Lali Lubani Road.

Wanderers must stamp out indiscipline among players. The best way to prevent the media from reporting about the happenings at Wanderers is avoiding such incidents from happening in the first place. Not the other way round.