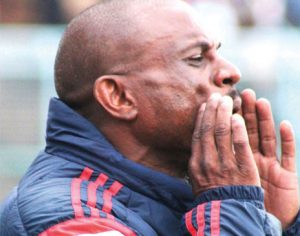 Non-league side Dwangwa Town Hammers have said they are ready to cause one of the biggest upsets in domestic football when they host Be Forward Wanderers in the Fisd Challenge Cup round-of-16 at Chitowe in Dwangwa, Nkhotakota, this afternoon.

The odds seem to be stacked against the Dwangwa-based side against giants and cup specialists Wanderers but perhaps Hammers are confident of doing a repeat of the biblical story of David who brought down the gigantic Goliath using simple weapons.

The Nomads have so much talent at their disposal but, in football, especially in cup games, miracles happen, so the Lali Lubani Road outfit must exercise caution.

Player by player, the Nomads have an advantage to progress to the quarterfinals, having assembled a squad worth more than K100 million whereas Town Hammers can only dream about that luxury.

But Hammers Coach, Kelvin Macheso, said his side is ready for the showdown.

“They may be a big name in the country but they have come to play us at Chitowe. We are also stars here. They are human just like we are and we see no reason to fear them. I have told my players that this is the moment to write history and we will do it,” Macheso said.

On their way to the round-of-16, Wanderers thumped Masters Security 4-0 whereas Hammers qualified for the national phase after finishing as Central Region district champions when they beat Mzamani FC 1-0.

Wanderers Coach, Bob Mpinganjira, said his side is treading carefully ahead of the encounter.

“Playing against such teams is always tricky. We just need to be on top of our game because we do not know what to expect. The players know the importance of the game and I am sure they will do a good job,” Mpinganjira said.

Realistically, this is the only available trophy for Wanderers to fight for as the TNM Super League is slowly heading to the rival camp of Nyasa Big Bullets.

Holders Kamuzu Barracks, Blue Eagles, Chitipa United, Airborne Rangers and Silver Strikers have qualified for the quarterfinals of the competition.

KB progressed to the quarterfinals after a 6-0 victory over Marka Express whereas Eagles dumped Nyasa Big Bullets Reserve out of the tournament courtesy of a 7-6 post-match penalties win.

There will be another David versus Goliath encounter on Thursday when Bullets take on Mzani at Dedza Stadium.