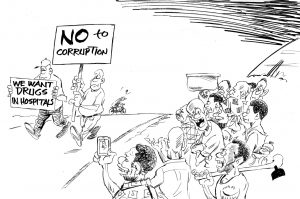 About 72 Malawians living in Area 38, Lilongwe, last week got an injunction from the High Court against Lilongwe District Council that stops it from evicting them from the land where they have been living for many years.

The council wants the 72 kicked out so it could build a police station on that land because it is public and the chiefs that gave it to them had no control over it.

In Mangochi, communities mid this month staged a demonstration petitioning President Peter Mutharika to act on illegal mining in Makanjira as well as the government-owned Namizimu Forest, saying they are degrading their environment and foreigners are taking away their resources.

In response to the straightforward petition, the President has ordered the Army to patrol the forest and over 100 people have reportedly been arrested after the soldiers were sent to the areas this week.

On the international scene, the Kingdom of Saudi Arabia is embroiled in a crisis after the death of journalist Jamal Khashoggi in its consulate in Turkey.

We have a problem in this country which, as a nation, we cannot deny anymore.

After 54 years of independence, our country is not in a position that we are proud of as poverty levels are still high, the economy has stagnated, infrastructural development is still a pipedream, corruption and bribery are on the rise, unchanged attitudes continue to be a problem among our leaders, governance problems remain unaddressed, wrong priorities in the use of resources and the list is endless.

To massage our collective egos, we have always and, rightly so, blamed our leaders for this state of affairs as we believe they have not charted the right way forward through having a strategic plan and implement it so that it has real effect on the ground.

So, yes, in the final analysis, the leaders should take a bigger share of the blame for our pathetic state of affairs because they are in charge, they are the captain in the flight deck of the plane to control any turbulence to safety.

But having said that, have we played our part as citizens of the 21st century by working hard in whatever we are doing to create wealth and then hold those that run our affairs astray accountable?

The answer is no and on that score we, Malawians, are also largely to blame and here is why.

The 72 Malawians in Area 38 in Lilongwe could be in the wrong that they built houses on land that should be under the control of the Lilongwe District Council as per laws but where were the authorities all these years to allow them to do just that?

What they have done is refuse to sit back and allow that they suffer injustice without a fight.

The Mangochi communities were right to petition the President to do something about people that were taking away their resources in daylight and damaging their environment.

It is not surprising that the President has acted by sending the Army to put order to matters there.

But, in the end, it is clear that we have not done enough when it has mattered and we have allowed our leaders to get away with blue murder by misruling, engaging in big-man syndrome, abuse power and resources, condone corruption and do nothing to improve our lot.

We have allowed governments to abuse our human rights, get away with unexplained murders and other shenanigans and, instead of speaking against these, we have instead praised that they are the greatest thing that ever happened to us.

We have instead told the presidents that they give us development as if they use their personal money when it is our own tax kwacha they use or get donations from rich nations or organisations in our name.

Instead of holding leaders accountable and telling them in the face that what they are doing is wrong and not in line with 21st century ideals, we have tended to look at everything through the prism of tribalism. Leaders have exploited it to their benefit.

We vote for someone not because they have the best plan for this country but because he comes from our region and we end up putting leaders that have no clue to change anything for of us.

We want others, such as the media or civil society organisations, to fight our battles and make Malawi better but, when they are in trouble, we laugh at them and never want to move a finger to help or give them encouragement.

We do not take a leaf from what the developed world is doing as profound examples abound.

Just look at how the world has reacted to the murder of Khashoggi in Turkey that it has cared less it involves a whole world major oil supplying Kingdom of Saudi Arabia.

The kingdom is shaken and others are predicting it could be on the cusp of change.

From the US to Germany to UK to UN, everybody is up in arms to hold the kingdom accountable.

This does not happen here as media houses are sometimes closed, journalists threatened but nobody seems to care and hold government accountable.

Journalists get threats every day and put their lives and those of their families in harm’s way but we do not give a damn about it.

All we demand is that they write all the big stories that massage our egos and never care about the threats to their lives and careers as we are safe in the confines of our homes.

But we, as Malawians, must wake up from our deep slumber because it has not helped us for the past 54 years.

We have let our leaders get away with blue murder as we have not stood up to them.

We have borne the full brunt of it all as our country is a laughing stock in the world.

There is nothing worthwhile in this place.