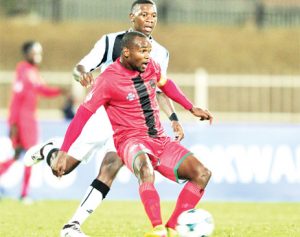 TNM Super League defending champions, Nyasa Big Bullets, are expected to further examine skipper John Lanjesi who was pulled out of Sunday’s match against Mlatho Mponela before half time after appearing to have sustained an injury.

Lanjesi was impressive when the People’s Team returned to winning ways, beating Mlatho 3-0 at Kamuzu Stadium.

The defender was returning from a hamstring injury that has seen him out of action for six weeks.

He was replaced by Bashir Maunde six minutes before half time after appearing to have aggravated the injury.

Bullets Team Manager, James Chilapondwa, said the substitution was a precautionary measure as they did not want to aggravate Lanjesi’s injury.

“We missed his services in almost five games and did not want to take chances. We will be examining him further before deciding the next course of action,” Chilapondwa said.

Bullets Coach, Kallisto Pasuwa, bemoaned the rate at which his players were sustaining injuries.

“It is such injuries that keep pushing us back and forth in our quest to win all our games,” Pasuwa said.

Pasuwa was also referring to full-backs Gomegzani Chirwa and Precious Sambani, who have also been on the injury list of late.

Hassan Kajoke scored a brace with Mike Mkwate scoring the third goal to help Bullets climb to fourth position on the table.