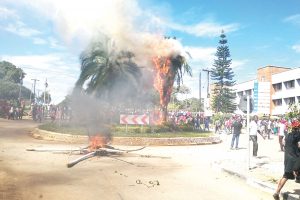 Since he was declared winner in the 2014 messy elections, Peter Mutharika has not carried himself with the pomp of a freely, fairly and credibly elected head of state.

Mutharika seems to be walking with a mental stoop and a psychological limp. Things are not that fine. His defenders, too, are working so hard to “legitimise” his leadership which is being challenged in court. You would expect it, especially when you are talking about a leader who was not in good taste with majority of voters.

To cap it all, Malawians, mad and disgruntled, have been on the streets protesting. The country is ravaged and it is not as tranquil as it is known to be. Mutharika has to large extent not made any meaningful move and has been playing his trademark head-in-the-sand game of pretending things are alright yet the country is on fire.

It is, of course, not strange. Once upon a time, Mutharika— Peter and not Bingu—was minister of Education. He sat nonchalantly and watched for eight months when the University of Malawi was closed during the infamous or famous Academic Freedom struggle. When he was asked to intervene then, his response was utterly disheartening and not expected from a leader. To him, eight months of closed colleges was ok and very normal. That is Peter for you. When you ask his blind minions, they will tell you that

Mutharika’s chameleon pace of handling serious matters is a mark of restraint and calmness. I said before that the big man might be dosing somewhere while the country is on auto-pilot.

A president worth the position and one with welfare of the country at heart should have been first to call for reconciliation talks with the disgruntled. But you and I know all this is not in his hands but those who handhold him.

One needs to be empty to think that all this clinging to power is about creating Paradise out of Malawi. The truth is that those inside are desperate to continue looting while those outside are working so hard for a chance to break the vault of national treasure.

Sadly, those who understand little about all this fight are the ones who will be hurt the most when all this simmers down. I am talking about the voters who had hope that one day this will become a country again and not a criminal enterprise that it has become because of few self-seeking individuals and some idiotic fanatics who always follow and defend inanity.

Look here, the demonstrations that have been taking place have been made to be believed as call for resignation of one Jane Ansah— Malawi Electoral Commission (Mec) Chairperson who presided over the controversial elections—but we are wrong.

The protests are only an eruption of volcano of anger which Malawians have allowed to be within them for so many years. Forget about the “Ansah and Mec Must Fall” calls. Malawians are just tired of systemic corruption, impunity, nepotism and everything that makes others feel less entitled to fruits of the nation.

Malawi, like it or not, is at crossroads and whatever and whichever road it takes will determine what becomes of us forever.

On July 6, there was that function at Kamuzu Stadium which we spend money on just to mock ourselves how we have failed to become a country. It is a session where mafias and thieves make lulling statements to serenade us to a belief that they care about us.

But Malawi is no longer a timid country and things will soon change. The initiated can easily comprehend the prophesy that is reeking from the fumes of burnt tyres.