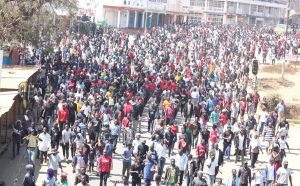 must be that they

fear you so much.

In John Avildsen’s 1992 movie, The Power of One there is one scene that oozes courage that defines and even defies the whole movie. The movie, set in the Apartheid South Africa during the Second World War, has some debilitating scenes of raw hatred between races.

Of all the races, the native “coloured” is the victim of rotten racial segregation. In the scene I am talking about, the most prominent native coloured in the movie, Geel Piet—played by Morgan Freeman— is cornered by a hardcore and brutal Boer warder who believes that Piet has organised a concert where other natives are singing derogatory songs about the Boer masters. When the warder throttles Piet with a baton and presses Piet to translate the song playing in the background, Piet looks straight in the eyes of the warder and tells him “They(Boers) run this way, they(Boers) run that way, they (Boers) are afraid”. Incensed, the Boer hits Piet with the baton and a dying Piet looks at the Boer in the eye and tells him “You are cowards,” before receiving a fatal blow.

History is replete with fine examples of monstrous people who worked so hard to suppress the truth. Hitler hypnotised his Nazi Youth, Gestapo and Schutzstaffel (SS) into believing they are a superior Aryan race that had a universal licence to exterminate Jews, in Afghanistan the bloody Al Qaeda shot people into submission and acceptance of the group’s gory beliefs, in North Korea everything that can enlighten people is banned by the government. All this is done to protect the insecure fat cats that feel threatened by the truth.

At home it is not different. The corrupt and the dirty have also mastered ways of keeping the truth away from people. If they are not using force then they will use some bogus court orders to stop people from knowing the truth. Sometimes they use their minions to threaten people. But the truth cannot be suppressed for long.

Reading this, someone will shake with burning fury because they know it is touching at their raw nerves. But who cares? We have all the reasons not to be afraid of these bumblebees that steal from us and expect us to look away. The year that is ending has seen the flourishing of corruption especially in the highest of places. But these thieves have created a solid chain that is protecting them from the public. And the chains are made up of a corrupt police force, fragile judiciary, stealing executive arm of government, an out-of-sorts Legislative arm of government and a disinterested citizenry.

We all know that right now it is only those close to President Peter Mutharika that will tell you that Malawians are enjoying life. How silly. It is only people whose brains have long gone on leave that will celebrate the “progress” we have made so far. And these are those belligerent jingoists who are even more willing to get angry on behalf of the President if anyone dares to point at his flaws.

Those that are basking in the illusion that this country will become anything better this year must pinch themselves harder to return to the reality of the damned place they are living in. With the uninspiring leadership we have right now, we might as well accept that we are cruising to damnation. What this government has seriously succeeded in is creating a fertile ground for corruption, impunity, lawlessness and rule of fear. The danger with a clueless government is that it becomes rabid and resolves to crackdown on its critics. But no one can suppress an idea forever. Soon, just like all bad governments, this too will go.

If you look around only people that have their names attached to corruption are being protected. The conspiracy theory is so easy here: likely the party in power knows that stamping out corruption means sealing the very hole that keeps it alive. So, they will make sure they create a clique to protect themselves and they will see to it that they gag everyone who exposes their dirty backside even by court orders. But most of us are not surprised by these tactics of the damned.

From the pan to the fire