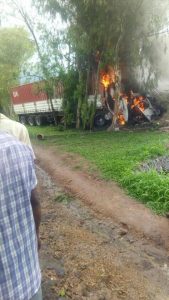 One person has died following an accident involving a truck at Keni location along the Zalewa Road in Blantyre.

The victim who was yet to be identified, happened to be the driver of the truck belonging to J&J Transport.

Witnesses said the truck swerved and hit the fence of a heavy goods transportation company, Cammel.

Peter Kambalikena, who works at Camel, said the victim was burnt to death after an explosion due to impact.

“I was fixing a car inside the fence when I heard the rumbling sound of a truck. I came out and saw the car speeding towards the fence and catching fire just after the accident. We tried to put out the fire but it did not work. We did not have running water so we had to carry the water in buckets, abandoning the hose pipe we had connected to the tap,” he said.

Kambalikena said the life of the driver could have been saved if there were sufficient enough water supply to put out the fire on time.

“The driver was okay, urging us to put out the fire as fast as possible so that he could escape. We failed to contain the fire and I saw him burn to death. The fire brigade came after the fire was almost contained,” he said.

He, however, said no one from Camel Transport sustained serious injuries, although people who were inside the fence when the truck hit it were taken to the hospital for further examination