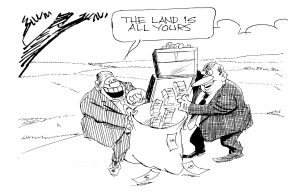 If ever there was a thing that led to the acrimonious relationship between the previous Democratic Progressive Party (DPP) regime and the very people that had ushered it to power back in 2014, then it was the sheer arrogance which those that wielded the axe of power under Peter Mutharika-led administration displayed in the face of Malawians, forgetting that theirs was but just an elected office and not like the day-to-day jobs which we, the ordinary folk, get to land once we apply and go through formalised interviews.

Why am I saying all this? It is simply to act as a reminder to each and every one of us that history is for us to learn from so that we can steer clear of mistakes that can be avoided.

This very week, the public domain was awash with some ‘not-so-pleasant’ news to do with the new Tonse administration which Malawians unanimously installed on the throne on June 23 this year through their precious ballot. What started it all were the startling revelations that State House was folking out some millions of kwacha to accommodate an Israeli national and his two colleagues whose mission was to train some of the country’s security agents. Now, never mind the fact that their mission has been made known to the public unlike what happened with another trio from Israel during the DPP era but still there is an element of shadiness in that House Number One tried to play down the issue by claiming that it was fake news and yet we are told that about K12.5 million was indeed paid to the hotel the three were lodging at.

Thus far, we have been singing praises of the new Tonse administration, especially on how transparent it has been when handling State affairs and it therefore would be foolhardy to start undoing the good deeds and goodwill which it is enjoying. Gentlemen and ladies entrusted with responsibilities under the new regime, please let us stay the course of transparency, accountability and justice for all if indeed the servant leadership that President Lazarus Chakwera has always preached is to come to the fore.

And in true statesman’s style, after getting wind of the developments, the Malawi leader endorsed propositions from civil society organisations for a quick probe into the Crossroads saga. That is the spirit, Mr. President… there should be no room for extravagance!

…of land ownership in Limbe

Well! Well! Well! That issue about land ownership in Limbe that was touched on by one of the avid Full Circle readers who sent feedback last week seems to have acted as tinder for a huge fire outbreak because, as we speak, accusations and counter accusations are coming out in the public space on the same.

My attention was drawn to a public statement that was issued in the course of the week by a company called Pacific Limited, in reaction to proclamations by Member of Parliament for Blantyre South East Constituency, Sameer Suleiman, alleging that 80 percent of Limbe is owned by two individuals and that, of the two, one of them owns over 50 hectares where he is fish farming.

This particular company is of the view that the legislator was referring to them, though he did not directly mention them. I am therefore surprised that Pacific decided to belabour itself by engaging in a tug-of war with the Blantyre South-East MP.

Well, as they say; who the cap fits let them wear it. Suleiman has stood his ground by pointing out that he is not mad to make such astounding revelations. I will repeat my reaction from last week that the city fathers have a lot of explaining to do in as far as the land ownership issue in the said area is concerned. It is my hope that the city authorities have not been ‘captured’ by those with fat pockets; if at all there are indeed those individuals/ entities that have placed a choke hold on Limbe.

I am reminded of what happened with the Ministry of Lands under immediate past regime, whereby we had political stooges turning the heat on public servants to endorse their land purchase, with the blessing of the powers-that-be. It was also the same ministry which startled Malawians after it was discovered that some ‘clever’ chaps had been operating a parallel Ministry of Lands. It is my prayer that this is not the same with Blantyre City Council which has jurisdiction all over the city, including Limbe area.

Otherwise, it is very sad that land ownership wrangles are arising now and again; and though we might not necessarily be able to point the fingers but certainly society knows who is behind the mess. I will leave it there for now.