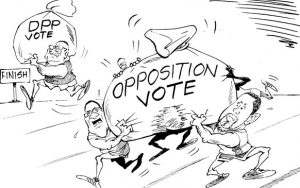 Unless the courts rule otherwise due to a judicial review that will rage after MCP petitioned for a recount of votes in 10 districts, President Peter Mutharika is our bona fide leader in this country and we all must accept it and move on.

The President himself struck a right chord the other day at Kamuzu Stadium where he appealed for national unity after a gruelling campaign full of rancour and bitterness, insisting that there can only be one winner in an election.

Well, he can easily say that because he is not the one holding the hottest end of the rod as he is indeed the winner.

While in the 2014 elections the difference between the two competitors was about 500,000 votes, this time Chakwera has reduced the gap to only about 158,969 votes representing a mere three percentage points.

The President got only about 38 percent of the total five million-plus votes cast, meaning to say about 62 percent rejected him and today he is only our president because we, as a nation, disregard the principle of majority and still pick a president based on the one who has the highest amount of votes even if they are minimal as long as they are the highest in comparison with all the other competitors.

Which leads to my point that the opposition has itself to blame for not sending one of their own to the State House due to inherent greed so pervasive in its ranks that each one of them think they can become president and in the end none of them will.

Because of this greed, the system will perpetuate electoral dictatorship and Democratic Progressive Party (DPP) will be the ultimate beneficiary at least for the moment unless the status changes and there is some semblance of unity in the opposition ranks.

If there was some form of deal struck between Chilima and Chakwera, by now one of them would have been at State House as president of this country and break the monotony of having one party in power even when its rule is not wanted by the majority of Malawians.

Even votes of John Chisi of Umodzi Party, at 19,187, representing 0.38 percent, with the others such as Reverend Hadwick Kaliya at 15,726 votes plus Peter DSD Kuwani of Mbakuwawaku Movement for Development at 20,369 votes together with Atupele Muluzi of United Democratic Front at 235,164 votes, representing 4.6 percent, were enough to propel one candidate from the opposition to win the State House.

This could have delivered the change that the majority of this country at 62 percent so badly wanted but they will never see due to the electoral dictatorship perpetuated by the First-Past-the-Post electoral system.

As for the President himself, he must acknowledge that 62 percent of voters wanted change.

To put it more bluntly, 62 percent of those who cast their vote on May 21 did not want to see the President at the State House and it was their right to do so.

The President must find out why this was the case and the information gleaned will enable the President to know what a majority of Malawians feel about his first five years in office.

The 62 percent are not the President’s enemies or less Malawian. Rather, they are bona fide Malawians who passed a judgement that his leadership did not merit continuing with it.

They thought his administration did not facilitate the accord of equal opportunities to Malawians of all manners in line with the Oath of Office that Mutharika took in 2014 and repeated it only four days ago on Tuesday.

They did not think the President did enough to curb corruption and other vices that eat into tax kwacha when hospitals have no drugs, schools have no books and farmers have no extension services extended to them because government money gets stolen.

Simply put, the concerns of the 62 percent that did not vote for Mutharika should not be swept under the carpet because they are not less Malawian than those that voted for him.

It is in this context that Mutharika’s call for unity must be looked into if it is to mean anything more than the word through which it was delivered.

There can never be unity when the feeling that permeates into the air is one in which only the 38 percent of voters feel a sense of belonging.

This is not the spirit in which the multiparty system of government was birthed in this country by those who fought for it in 1993.

Rather, it was equality for all but in the spirit of debate and holding of divergent views as we chart the future of the nation.

As for the opposition, they have let down the 62 percent of voters who did not want a DPP government because of greed and they will be in the opposition for the next five years—all of them.

Another innovator from Wimbe