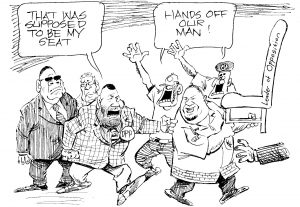 The standard political behaviour world over is that when you lose an election as a leader of a political outfit, you bow out immediately.

Somehow this simple straightforward reasoning seems to elude our leaders in Africa in general and Malawi in particular.

It has been almost three months since Malawians decided that they had had enough of the malaise of the past six years and no longer wanted Professor Peter Mutharika to run their affairs as president of this country.

Instead, they chose a leader of the party, MCP, which Mutharika vowed would only go back to power over his dead body.

Again, it is been three months, almost, and I have not seen Mutharika’s dead body for MCP is in government.

But I digressed and that is a story for another day.

The story today is that Mutharika lost an election and at 82 years of age, he should have relinquished power in DPP by declaring all systems to go, with a view to choose a new leader ultimately at convention.

This has not happened.

On the contrary, Mutharika still harboured dreams of continuing to lead the party and secretary general Gresselder Jeffrey has been made a pariah for declaring that the former president is way past it as she was even barred from attending a National Executive Committee (Nec) meeting as a punishment for uttering nothing but the naked truth.

And so, the case for Mutharika is like this: If I cannot be the one to continue to be leader of DPP, then it will have to be someone I will personally choose.

As a result of this stand, the once mighty DPP is tearing apart. Every day there are stories and names attached to them, the latest being that the DPP is considering a merger with the UDF where it came from and that Mutharika favours Atupele Muluzi to be the leader of the new political outfit, setting aside all characters that supported him for the past six years.

As a result, an all-out war on who succeeds him is currently raging in the opposition DPP, with Vice President for the South Kondwani Nankhumwa, who is considered a top contender, being called for a disciplinary hearing that failed last week for what the party hopelessly considered breach of discipline.

A letter signed by the committee’s secretary Charles Mhango said Nankhumwa undermined the authority of Mutharika, contrary to his express instruction on the appointment of Leader of Opposition in Parliament.

This is a power struggle between Nankhumwa and Mutharika who sees the ambition of his once protégé as betrayal of the first order.

Mutharika is essentially saying Nankhumwa made himself Leader of Opposition by conniving with secretary general Gresselder Jeffrey before the former president, as DPP leader, communicated the same to Speaker of the National Assembly Catherine Gotani Hara that his choice was George Chaponda.

The whole nation knows that there is a never ending rivalry between Chaponda and Nankhumwa and Mutharika seems to encourage it by using the former to sort out the latter, which is a big mistake.

Nankhumwa seems to be at ease about it all and the reason is simple.

Some would look at it as Nankhumwa’s attempt at using emotional blackmail and threats but the reality remains that he has support with unofficial figure putting the number of MPs supporting him at 30 and we saw some of them that Friday morning, including even former Cabinet ministers.

Because Nankhumwa is a step ahead of the political dinosaurs in DPP that include Mutharika, they are making silly mistakes giving him a chance to strike back mercilessly.

During the hearing, the party also wanted to inquire into Nankhumwa’s academic qualifications, saying he has not conclusively responded to public queries into his qualifications.

This is not justified and it cannot be a disciplinary hearing matter.

That is why Nankhumwa had the last laugh.

Nankhumwa and his lawyer breathed fire, questioning the credentials of some of the characters on the panel as interested parties who want the party’s leadership as well as Leader of Opposition, such as Chaponda himself.

Nankhumwa was also clear that the issue is not about discipline but a fabrication to stop him from contesting for the position of president of the party during the convention.

By now they must be contemplating to fire Nankhumwa from the party but they should be wary of that decision as it has serious ramifications because, as I said, the Leader of Opposition has support in the party and it includes former Cabinet ministers and even the leader of DPP backbenchers in Parliament, Victor Musowa who comes from Mulanje South.

In the end, the larger picture is that the party, or Mutharika to be specific, is failing to manage change, treading dangerously more or less on the same path of other multiparty entities such as UDF and Aford which led to their demise.

What we are seeing and hearing could be probably the death knell of the once mighty DPP for failure to manage change.

What the party needs to survive is hold a proper convention where all willing contestants are allowed to run.

Getting rid of the progressives and liberals as represented by Nankhumwa something that the conservative wing of the party is doing, and they have Mutharika on their side, would be catastrophic.

It has happened to UDF and Aford. I thought Mutharika should be cleverer than that.

The opposition is in a shambles and Mutharika is the main cause.